For various unconnected reasons I've been thinking of a trip I did with R five years ago to Big Bend National Park in Texas. Dry and rugged terrain unlike anything I'd ever seen. 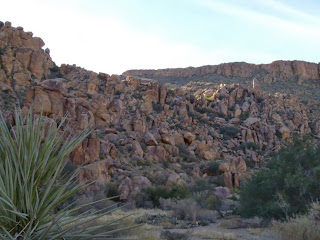 We flew to San Antonio. What struck me first was the sprawl and breadth of the streets, the overall sense that everything had melted and spread under the blaze of the sky.
Next I noticed the Day of Dead shrines. Día de los muertos. There are lots of Mexicans in Texas (which used to be Mexico) and they've kept much of their culture--for themselves, not just for touristic reasons. 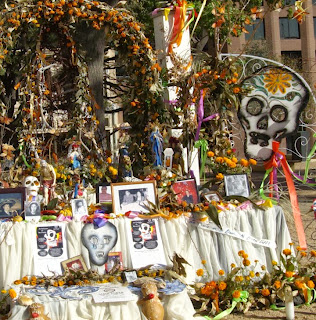 The Day of the Dead was three days earlier, but the shrines were still in place: beribboned and draped, piled with photos, flowers, madonnas, candy skulls and wax skeletons grown soft after three days in the bright sun. We drove past cemeteries we might not have noticed except for the gravestones decorated with balloons and banners as if for a big family party.

While in San Antonio, we visited the Missions which were compounds built by the Spanish from 1690-1730 (approx) to protect/civilize/colonize the natives. The churches are shells now, with sometimes only a single wall left standing. At one we saw a bride waiting for the photographer to arrive. 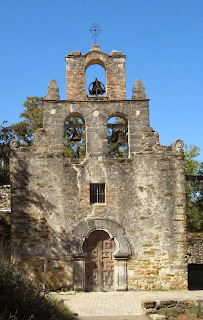 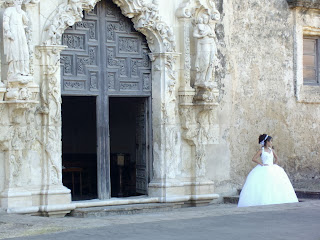 Here's a Madonna--not the usual slim and pale Caucasian we see in Canadian churches. Also a crucifix in a bed of cacti. 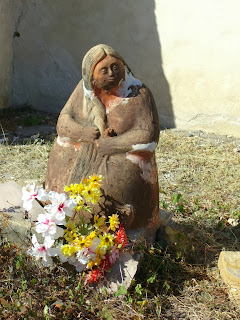 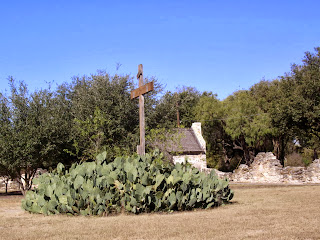 We'd been told that San Antonio is the hub of culture in Texas. Perhaps it is. I spent a couple of days looking for a bookstore, thinking to pick up a few small-press American books that weren't likely to be sold in Canada. Finally I asked in the Tourist Office. A woman with a big smile informed me that there was NO bookstore in the center of San Antonio--BUT there was a Borders on the outskirts. What a lousy reason to smile. The outskirts of a city in Texas means many miles. It assumes that people who buy books have cars. Borders is like Indigo, right? I went, since it was on our way out of town, but they had the same mainstream books I could have bought at a chain bookstore in Montreal.

On the drive to Big Bend National Park, we saw lots of fun things. For example, in Texas you don't even have to get out of your car to buy a drink or hydrogenated, garlic-powdered, fried snacks. These red barns are drive-through convenience stores.
Notice the sign for deer corn? People like to feed deer. Lots of other places have signs for dressing deer. Once you've fattened them up... 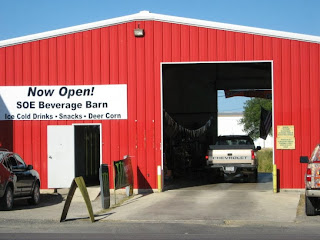 We chose not to drive through the Beverage Barn, but then we were thirsty. We pulled in at a place called The Hog Pen. Despite the rusted car carcasses out front, there seemed to be a building where one might buy drinks. Inside there were no lights. A voice drawled from the darkness, You lookin' for help? R said yes, we wanted cold drinks. How about a root beer? the voice suggested. We said that was fine. I asked if there was a washroom. The voice said, Billy, show the lady the toilet. A skinny kid with freckles jumped from the shadows and brought me outside to a door. He opened the window, reached in to unlatch the door from the inside and gestured for me to make myself at home. When I got back, the man behind the voice had appeared to take R's money for the root beer. He was amused that we were Canadians. He asked what it was like to live with snow all the time. We told him it didn't snow all the time--that, in fact, in the summer we went swimming. The kid with the freckles was agog. 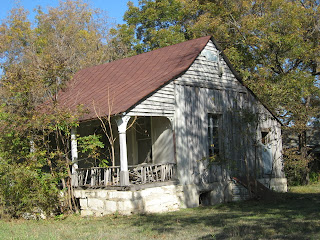 It's not all Southern Gothic. We also spent a lovely afternoon at Becker Vineyard where we sat on an enormous veranda with twirling ceiling fans, sipping excellent wine and eating fresh pecans. (Pecans weren't supplied; we'd brought them ourselves.) Behind the veranda were lavender fields, which were not in bloom in November, but still beautiful. 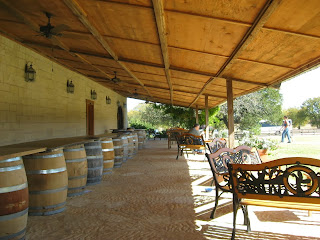 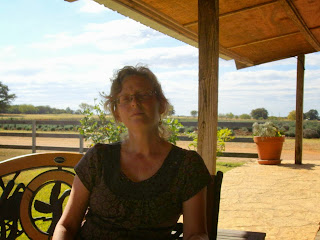 The drive to Big Bend was long and flat. Mile after mile looked just like this. 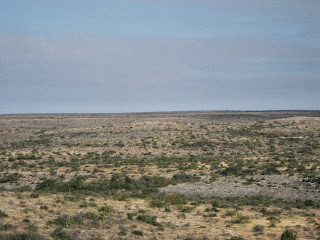 Stopping for food always felt like a social/cultural experience. At one place the counter was already decorated for Christmas--with tiny fairy lights inside coloured shotgun shells.
Sometimes I felt that when we stepped through a doorway, we'd time-travelled too. 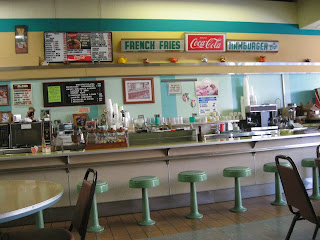 It took the longest time before the mountains of Big Bend finally appeared on the horizon, and even when they did, it still took hours before we got there because the land between us and them was so stretched and flat. See how the road does that perspective line thing off into the distance? (Okay, it's only 6 hrs of driving from San Antonio to Big Bend, but we took all those interesting detours.) 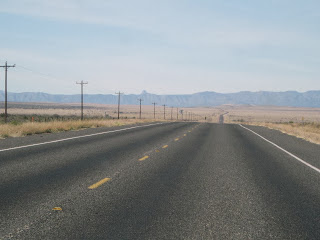 We spent a night in the motel that was in Wim Wender's film, Paris, Texas, which in itself was neat. The motel isn't advertised as such, but we watched the movie a couple of years ago, after going to Texas, and recognized the whitewashed cinder block cabins with the corrugated roofs. Looked it up and yeah, one of the set locations was in Marathon, Texas.

So here are some pictures from Big Bend, an 800,000 acre park with mountains, deserts, buttes, mesas, canyons. On a single hike, we saw miniature palm trees, fir trees, blooming cacti, an armadillo, a road runner, gigantic kamikaze grasshoppers. We looked down onto ancient volcanic crowns. The silence of so much dead rock was astounding. We hiked through a canyon where the marsh grass towered over our heads, and the sand was so dry, it had cracked. 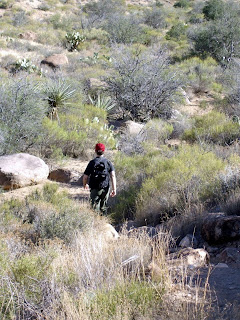 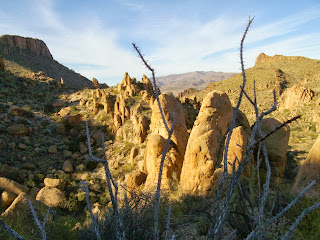 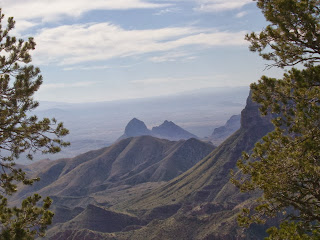 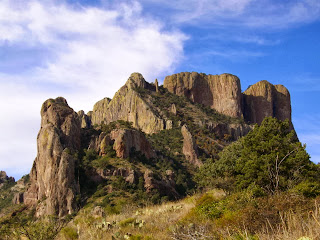 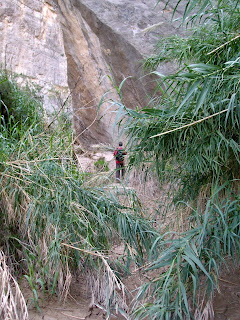 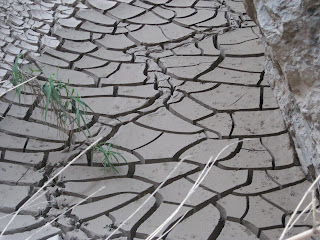