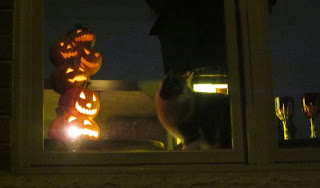 Do you see the cat in the window?

I write Hallowe'en with an apostrophe which was how it was spelled when I was learning how to write. It must be another of those UK/US things. Colour, travelled... all those words Blogger and Word claim not to recognize. My texts are sprinkled with red squiggles. (Mind you, I write 'recognize' instead of 'recognise', so I'm not even consistent with my spelling allegiances.)

Everyone asks everyone whether they hand out candy on Hallowe'en. I don't, which (I'm sorry) is too bad for the kids in my neighbourhood, but I can't bring myself to hand out all that white sugar in whatever caramelized, chemicalized, glazed, crunched and chewy form it comes in. Homemade goodies with real ingredients would be acceptable, but if my child came home with homemade anything, I would throw it away. That's sad but that's that. It's the world we live in.

I do love the pageant of carved pumpkins and costumes. I wish Hallowe'en were a day when everyone disguised themselves in costume. Though then I suppose I would wonder about the fantasies and alter-egos people were acting out.

Here are some pix I took today when I was downtown. I like how the man dressed as a manikin didn't just do his head but his hands too. The young woman with the bloody dirndl painted the teeth over her black lipstick. The woman in the towel with Batman was still there an hour later when I walked by. 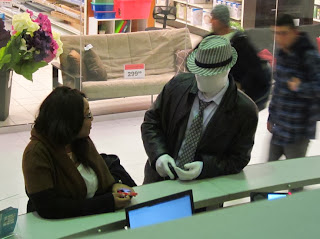 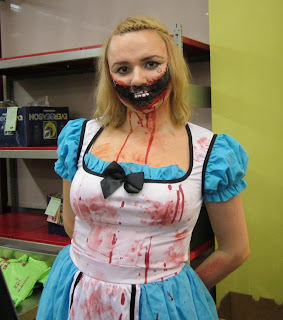 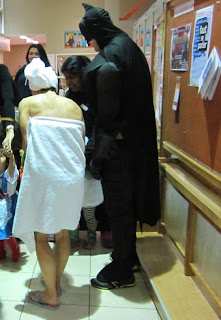 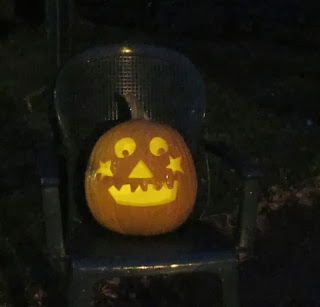