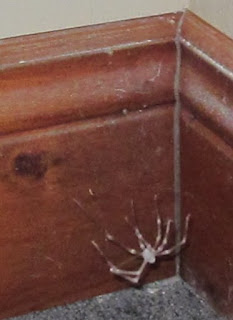 I got startled the other day when I was kicking off the clogs I wear to go to the cellar and saw this white spider. I watched it for a while, but it didn't move. Spiders can hang motionless in their webs for a long time.
I asked R who said there were lots of them hanging all over the cellar. Clearly, I don't go down there any more than I have to. To get a hammer or machine oil. A bottle of wine. It's a dirt cellar 110 yrs old. It's damp. There are centipedes. Centipedes make me shriek. I can go into the cellar. I just prefer not to.
R said the spiders were dead. But if that's what happens to spiders when they die, why haven't I seen any like this before? Do spiders only die in cellars?
When we moved into this house, one of the downstairs rooms had crayon drawings on the wall of balloons with strings trailing from the bottom. I realized the balloons were supposed to be spiders. How many spiders do there have to be in a house for a child to start drawing them on the wall?

I tried to look up what this white spider was. The best answer, I think, is that it's a spider exoskeleton. Spiders' skeletons are on the outside of their bodies. Several people opined that when spiders die their skeletons turn white as they lose blood flow. Another explanation is that spiders molt when they get too big for their skeletons--like bursting out of a straight jacket and too tight leggings all at once.
I believe it's a skeleton because it looks like one. I don't know how it got like that. It's definitely lifeless. Three days later and it hasn't budged. No way am I touching it.