Recently, I was so lucky as to get a lesson in how to make dhalpuri roti. My sister-in-law's family is visiting from Trinidad. I planned to arrive early enough at her house to help in the kitchen. I was late.
When we got there, her mom had just started to mix the dough. Her sister stood at the stove adding ground yellow split peas to geera--roasted cumin. Yellow split peas are called dhal.
I've tried to make this dhal mixture on my own. Every time my split peas are cooked too long and turn to mush, or not long enough and then won't grind into the moist powder you need to make these roti. The split peas should be cooked until they keep their shape but you can bite into them. Sounds easy, but I haven't managed to do it yet. When done right, the ground dhal should be light and fluffy like very fine couscous steamed just right.
The dough for the roti was made with flour, baking powder, some yeast, and water. How much of each? Well, if you have to ask, you're not in the right kitchen.
S's mom mixed a great mass of dough in an enormous bowl, removing clumps she decided were ready to be kneaded, at which I was allowed to help. 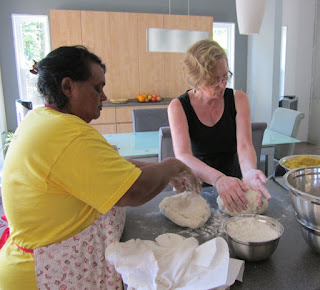 The dough was formed into small balls the women called loyas which were left to rest under a towel. For how long? An hour, two? I wasn't paying attention. I do know that when making dough for breads, as opposed to pastry or biscuits, you want the stretchy gluten quality in flour to develop and so you let it rest.
Now came the tricky part: stuffing the balls of dough with dhal. A loya was shaped into a dough cup, the cup stuffed with dhal. The edges of the cup were pinched together and the ball was rolled smooth again. 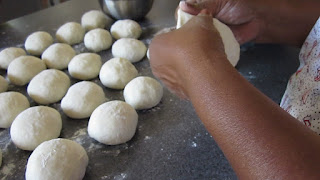 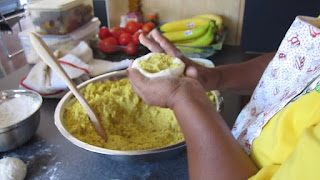 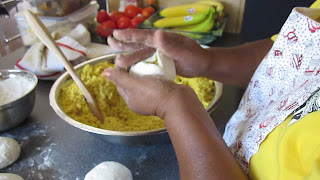 These balls were left to rest again--and again, I don't recall for how long. Other foods were being cooked, there was a quick shopping trip for salt cod, a few moments to spend with my favourite niece, the prospect of swimming.
The cast-iron tawah was put to heat on the stove and brushed with oil, and we began to roll out the
roti, hoping that none of the dhal inside the dough would "bust through". S's sister brushed the roti with oil and flipped it. A perfectly made roti with all the dhal sealed inside puffed as it was cooking. Here's one: 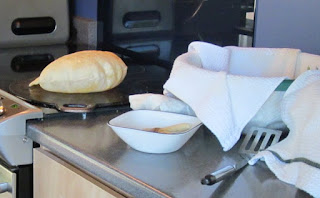 The last step was to press the roti flat again and fold it. See that large bowl on the counter? By the time we finished, it was heaped full with dhalpuri roti.
I should now have a picture of a finished dhalpuri roti on a plate, being eaten, BUT: when we sat down to eat, I was so bewitched by the spicy smells and delicious possibilities--crispy pork cutters, accras with tamarind chutney, shrimp, chicken, curry channa with aloo--that I forgot all about my camera.
Fortunately my sister-in-law always sends us home with a care package and today I took a couple of dhalpuri roti from the freezer to have with this stewed bean dish R cooked for supper. Here you can see how the roti holds dhal spiced with roasted cumin. Tender and tasty. Good! 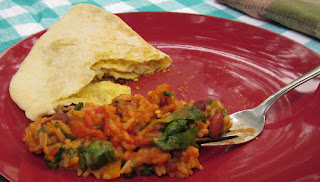