People wonder how much fiction writers copy from life and how much they fabricate. What about when life mimics what you've written? You're in the middle of working on a piece, you ask a few questions, do some research, keep your eyes open--and what's this? What you're writing about happens.
No way, you cry! I'm writing about this. It was my idea first. Let life get its own. Life has got more resources. Life can branch out anywhere. Life can be sloppy. No one will accuse life of an implausible scenario.
And yet it happens. For example... I'll use an example from a few years ago.
I wanted to write a story around a character modelled on my cantankerous, pious, trouble-causing, never-forget-a-grudge, wrinkled, stumpy-legged Alpine grandmother. My fictional oma (like my real-life oma) was a staunch anti-Semite. I decided to have her meet a Jewish man whom she never realizes is Jewish. She's lonely, spending  afternoons in her granddaughter's Montreal apartment, and lo, there's this elderly European gentleman sitting on his balcony.
How do they communicate? I decided that they could, in the same way that I don't speak Yiddish but can understand the gist by recognizing words that are similar to German.
In the story, the Canadian granddaughter invites her neighbour to supper. When she brings out the Austrian dish she's prepared, he stares and tears begin to roll down his cheeks. It's a dish his Polish mother used to make while his family was still together, before they were sent to Dachau.
The meal is plum dumplings--zwetschgenknoedel. Whole plums are enclosed in a cottage cheese dough, boiled, then rolled in browned, sweetened breadcrumbs. 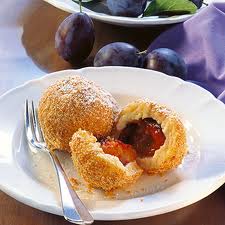 I'd written the story but wasn't sure if my Polish Jewish character was likely to have known about this dish. I could have made him an Austrian Jew, but if he spoke German, then my fictional oma would have discovered he was Jewish. It was important that she could communicate with him just enough to fantasize  about this pleasant elderly gentleman with the courtly European manners.
As it happens, I work in a Jewish hospital. I decided to ask the wife of a Jewish patient who was Polish about zwetschgenknoedel. I didn't use the name, assuming that she wouldn't know it as such. I described how whole fresh plums were wrapped in dough. While I talked, I wasn't looking at her but at my hands with which I was trying to demonstrate the different steps of wrapping the plums, lowering them into boiling water, rolling them in crumbs so they were nicely coated. I was hoping to convince her that once upon a time she'd seen or heard of these delicious fruit dumplings.
She still hadn't answered me, so I peeked. Tears were streaming down her cheeks.
What's wrong? I asked.
Her mother, who'd died in a concentration camp, used to make plum dumplings. She hadn't had them since. She'd forgotten all about them. I had just reminded her.
I felt badly because I hadn't wanted to make the woman cry. Though--as in my story--I marvelled that a beautiful memory could survive across the horror this woman (and the character in my story) must have experienced. That, for me, was the emotional truth of the story.
Still. It freaked me out when the woman began crying like the character in my story.
Posted by Alice at 9:17 AM