A friend shared some of the excellent homemade ricotta her Greek neighbours gave her. Here, look, I made Kasnudeln. 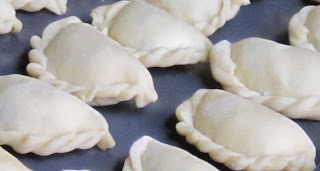 They're  filled with cheese, mashed potato, browned onion, and lots of mint. Mint is what makes them taste different from pierogi.
It's been a few years since I last made Kasnudeln. It takes time to knead the dough, make the filling, form the dumplings. The fun part is pinching the "wreath". It was the nicest way I could think of to do honour to the homemade cheese. I served them with minced parsley, Greek yogurt, a green salad.
I don't often make Austrian food. Although my parents are Austrian, I didn't grow up eating dumplings. My mother preferred opening a can of Campbell's tomato soup, dumping it over a pan of ribs, shoving the ribs in the oven.
My aunts showed me how to make dumplings when I went to Austria. There's a large bread dumpling called a Serviettenknödel--a tea-towel dumpling because it gets steamed inside a wrapped and knotted tea towel. There are cottage cheese dough dumplings that enclose a fresh apricot or a plum. Zwetschgenknödel. There are dumplings made with cream of wheat, butter, and parsley, to be served with soup. Grießnockerl. Dumplings made of an eggy pasta dough dropped through a slotted metal grid.  Spätzle. There are smaller bread dumplings that can be made with different ingredients and herbs to flavour them.
Some day I'll have to write about people like myself, who don't otherwise identify with their parents' culture or heritage, but like to cook the traditional dishes.
Posted by Alice at 8:54 PM