living in a tit

Some years ago I was sitting with a senior writer at a prestigious writing school. She wanted to know where I lived. I told her Montreal. She asked me to draw it.
I suspected a game but I obliged. I drew the island of Montreal which lies in the St. Lawrence River. 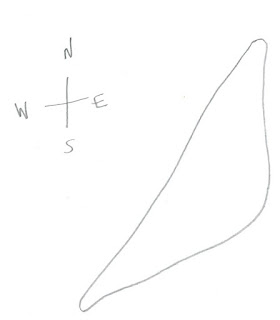 You'll have to excuse my drawing skills which are primitive. That's the shape, more or less. I've included the north-south axis to indicate a peculiarity of life in Montreal, which is that everyone pretends the bottom end of the island points west, the top end east, etc. That bottom end is called the West Island. The bulge is referred to as the south of the island. When you're on the island--and considering that you're in an urban environment where most people don't notice where the sun rises and sets--it makes perfect sense. It's only when you look at the map on paper that you see the West Island isn't west.
But to get back to my conversation with the esteemed writer. She was quite excited when I made this drawing of Montreal. Don't you see? she insisted. This is a breast! You live in a breast!
I didn't what to say. Before coming to the prestigious writing school, I had never sat and talked with a writer of renown. People looked up to this woman and sought her advice. I, too, had lobbied for this private afternoon with her. I wanted to answer in a way that seemed worthy of her attention.
I said, Do you want to know where I live in Montreal?
Oh yes, she did.
I live in Point St. Charles which is a point that juts out into the St. Lawrence. I scratched it in for her. She was delighted. 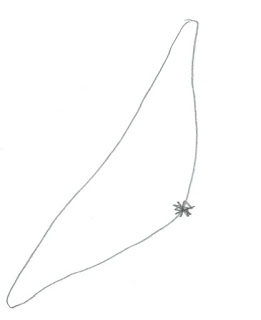