the wolf and the seven kids / scissors, needle and thread

Time for another Grimms fairy tale from my grandfather's book. I choose this one because I love the illustrations--scratchy ink sketches that capture posture and expression. Thank you once again, master illustrator Fritz Fischer.
The kids in this story are baby goats dressed like children. Throughout the book animals are depicted both dressed and undressed. Hairy bears, sleeping cats, green-skinned frogs. The decision to anthropomorphize seems arbitrary--nothing to do with their role. Some of the animals speak and reason, yet stay on all fours.
Here we have the wolf who's the bad guy in this story--three different angles, just in case we don't get the message. Look how he handles that walking stick. The ragged hems of his trousers despite the worldly pose.

BTW, for anyone looking for an exact translation: I don't translate word for word. I've kept the plot twists and turns in the event that some reader sees their significance more than I do. Words and sentiments are often repeated--as they are in children's stories. Say something once and it's said. Say something twice and it resonates. Say it three times and doors open, fate slams into place, wonders, magic, and/or destruction happens. After all these centuries, throughout so many cultures, three-time repetition seems a hackneyed mechanism. A tired flourish. Yet human nature hasn't changed. Readers expect it. So be it. I've kept the repetition. However, I've trimmed some of the lengthy verbal constructions that belong to German. I don't believe I've rewritten or changed the story. I'm aware that the concept of translation versus interpretation versus adaptation has many nuances for those who work as professional translators. But I'm simply translating fairy tales from my old Grimm's--and no one is paying me.

Once upon a time there was an old mother goat. She had seven young kids she loved dearly. One day, when she needed to go into the forest for food, she called them around her: "Dear children, beware of the wolf when I'm gone. If he gets in the house, he'll gobble you up. He'll try to disguise himself to trick you, but you can always tell it's him because of his harsh voice and black feet."
The kids assured her they would be careful and she could leave them alone without worry.
Not long after the mother goat left, someone knocked on the door. "Open up, dear children, your mother has returned with something for each of you!"
The kids heard the harsh voice and cried out, "You are not our mother. She has a soft lovely voice. You are the wolf!" 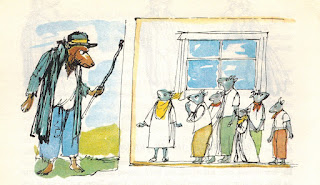 The wolf left the house and went to a shop where he bought a large piece of chalk which he ate to make his voice softer.

--is this true? I just googled "eating chalk" and discovered that it's an eating disorder which will constipate. No mention made of its effect on the voice.

The wolf returned to the house, knocked on the door, and called: "Open up, dear children. Your mother is here with something good for everyone."
But the wolf had laid his black paw on the windowsill and the kids cried out: "We won't open the door. Our mother doesn't have black paws. You are the wolf!"
The wolf ran to a baker and said: "I've stubbed my feet. Paint them with batter." From there he ran to the miller and said: "Dust my feet with flour."

--I'm wondering 1) why the baker didn't have flour and 2) if a doughy, floury paw is a plausible disguise. But this is 2012 and the story was published in 1812. Perhaps people were more gullible then. And I've just noticed the dates. 1812 was 200 yrs ago which makes this an anniversary of sorts. Oh yeah... and it's a children's story.

The miller guessed that the wolf had some nasty scheme to deceive someone and hesitated, but the wolf said: "Do what I tell you or I'll eat you."

--so why didn't the wolf? Why not, if he had the miller standing in front of him? Why go through all these messy shenanigans with doughy feet to get seven little goats to open the door?

Afraid now, the miller sifted flour across the wolf's paws. Yes, that's how people are.

--that last comment isn't me editorializing. That's one of the brothers Grimm intruding on the narrative flow.

The wolf returned to the house, and for the third time, knocked on the door, and called: "Open up, children, your dear mother has come home and brought each of you something from the forest."
The kids cried out: "Show us your paw, so that we know you're our mother."
The villain laid his paw on the windowsill and when they saw that it was white, they believed him and opened the door.
When they saw the wolf, the kids were terrified and tried to hide. They darted under the table, into bed, inside the oven, to the kitchen, in the cupboard, under the washbasin, in the chest of the wooden wall clock.
One by one, the wolf found them and popped them down his throat. He missed only the youngest and smallest who'd hidden in the wall clock. Satisfied now, he made his way to meadow where he lay under a tree and fell sound asleep.
Soon the old mother goat came home. And what did she find? The door to the house gaped wide; the table, chairs, and benches were upended; the wash basin was in shards; the covers and pillows yanked off the bed. She searched for her children, calling one after the other by name. When she called for the youngest, a small voice piped up: "Mother, dear, I'm stuck in the clock case." She pulled out the child who told her that the wolf had eaten all the others. You can imagine how she cried.

--more authorial interjection which is quite unnecessary to the story. But in the 19th century the author liked to remind the reader who was writing. For me, this self-consciousness about the text feels vaguely postmodern. (Did I just use that word? Ouch.)
In any event, since I've interrupted, let me mention gender. In German, there are three: masculine, feminine, and neuter. Children--girls and boys--are neuter. While translating, I've avoided using "it" when referring to a child, because I don't like it. In the story, this last child who wasn't eaten is an it. The illustrator obviously made his own decision because he dresses the kid in a skirt. 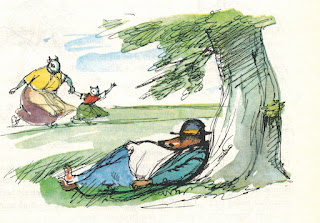 The old mother goat ran with her child to the meadow where they saw the wolf under a tree, snoring so loudly that the branches shivered. From where they watched, they saw movement and kicking in his big fat belly.
Oh God, thought the mother goat, are my poor children still alive?
Quick, she sent the littlest kid running back to the house for scissors, needle, and thread.
With the first snip into the monster's belly, one kid popped out a head, and as she kept cutting, all six sprang out, one after the other. All were unharmed, since in his greed, the villain had swallowed them whole. The kids danced about and hugged their mother.
Their mother said: "Go now and find big stones." The seven kids dragged heavy stones to their mother who dropped them into the wolf's stomach--as many as she could. Swiftly she sewed him up.
When the wolf finally woke, he got up, and since the stones in his stomach made him thirsty, he looked for a well. As he started to walk, the stones in his stomach knocked against each other and rolled about.

"What rumbles and bumbles
Around in my belly?
I thought I ate six young kids
But it feels like stones."
When he got to the well and bent over the water to drink, the heavy weight of the stones tipped him and he sank to the bottom and drowned.
The seven kids cried out--"The wolf is dead! The wolf is dead!"--and danced in joy with their mother around the well.

Yup, you have to read one of these old-timey stories if you want an innocence-is-rewarded scenario. It also helps never to forget scissors, needles, and thread.