The incessant thump these days is a mallet and chisel. We’re having the brick on the house redone. It dates from 1902 when the house was built: a row house with a flat roof and cornice, as is common in Point St. Charles in southwest Montreal. (For a standard Point cornice, see the blog photo above.)
When we bought the house ten years ago, we sometimes noticed a shard of brick on the deck in the winter. Broken clay in the white snow. Hard to miss. Every winter more bits of brick flake and pop off the walls. The snow gets peppered.
We've heard lots of theories as to why this happens—as many as there are people willing to hypothesize. It could be the heat escaping from a poorly insulated house. It could be pockets of moisture that expand and contract. It could be the layer of paint a previous owner slathered on the brick, thus sealing what should ideally be porous. (Except that I’ve seen pieces of brick on the ground below unpainted brick houses.) Etc, etc.
I don’t know what the answer is. Our brick pops and the mortar between the bricks is aged and thin like a measly layer of stone jam. We asked about sandblasting, which looks great, but apparently weakens the brick. And we would still have to repoint the mortar. Replacing the brick would cost as much as we paid for the house. No thanks. Some people cover their ageing brick with siding. I don’t like the look of siding. Everyone gave us different advice depending on what they were selling. We wondered if eventually we would have a house left. Perhaps in twenty years, if we didn’t fix the brick, we would be living in rooms with only inside walls.
Last summer I noticed a man working on a neighbour’s house. He was up on the scaffolding, chiselling away the old bricks and turning them around so the inside edge faced outward.
What a great idea! Recycling the old brick which is of higher quality—denser—than most of the new brick used now. And beautiful! All that lovely hundred-year old brick given a new life. 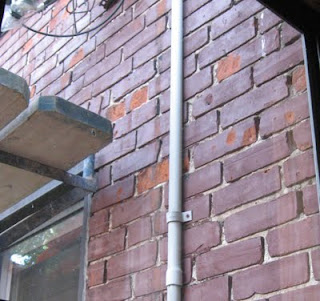