We’re still having our brick redone. The old bricks taken off and turned around. Because of the configuration of the house, there are three back walls. At the rate that the bricklayers work, they might still be there by Halloween. Hopefully not Christmas. We’re paying for the job, not by the hour, so I don’t mind how long it takes—as long as we’re not left with an exposed wall once winter hits.

The guys are usually parked in the alley by 7 am. They sit in their van knocking back power drinks and smoking until 8 or 8:30. Gearing up. Chatting. They arrive early because they would sooner sit in the alley than in traffic.

Do you know this about Montreal? It’s on an island. People who live off-island and have to cross one of the few bridges every day to get to work and home again suffer from chronic stress debilitation. Or they pop meds. Or they leave home before dawn, like our bricklayers, to avoid the congestion.

I can hear when the bricklayers decide to start work because one of the guys bangs the ancient mortar  mixer with a shovel to unjam the parts crusted with the previous day’s mortar. He eventually gets the mixer moving and churns up a bucket of fresh mortar. He’s the gopher who stays on the ground, hauls rope, carries bricks. The other two hoist themselves up the scaffolding and start wielding their trowels.

That aspect of their work—spreading mortar, gently placing a brick, scraping a neat line with the tip of the trowel—would look graceful if it weren’t so dirty. Our windows are streaked with mortar, the deck heaped with rubble, broken bricks, chunks of old mortar, empty water bottles. Both outdoors lights and the back gate is broken. We’ve got only a tiny backyard with a sand cherry tree, a sumac, a few raspberry bushes, enough lawn to host a party of four. Forget the party. Any greenery we had wears a ghost of brick and mortar dust. My bicycle tires are wedged in mud. (Or mortar. I’m afraid to check.)

Most of the time I try not to look at the chaos outside. The bricklayers have said they’ll clean up before they leave. They don’t ascribe to the view that if you clean up as you go along, you won’t have as much to clean up at the end. Everyone has their own method. I'm not sure I would ever finish writing a book if I took as relaxed a view as the bricklayers do, but I'm obsessive-compulsive about writing. I know that.

Once these guys are up on the scaffolding, they stay there until noon. There’s not much to do up there but remove bricks or lay them, so work proceeds steadily. They talk while they work, mostly about work. They play music (1990s rock?) which I don't hear because the windows are closed against the clouds of mortar dust. If they're happy while they're working, then I'm happy too.

Lunch break, however, can herald a turning point in mood. Some days they stop for lunch and start again in an hour. Some days they disappear for the rest of the afternoon. Once the gopher trailed back on his own, but what could he do by himself?

The one and a half walls that are finished are gorgeous: old brick with clean edges. The original brick from  1902 came from three different factories, so the colours are variegated.

Most brick houses in Montreal are wooden houses encased in brick. Ours is a brick shell with a brick exterior. You can recognize this kind of house from the outside. Instead of bricks placed lengthwise, row upon row upon row, you’ll see the short end of a brick—the head—facing you every so many rows. This brick joins the inner brick wall with the outer brick wall.

In English this brick is called a bull-header which sort of makes sense. The short end of a brick is the header and I suppose it looks bullish facing the world as it does. In French—at least here in Quebec—it’s called a buddhist. Why? The bricklayers can’t tell me and the term isn’t listed in my dictionary of Quebecois expressions. 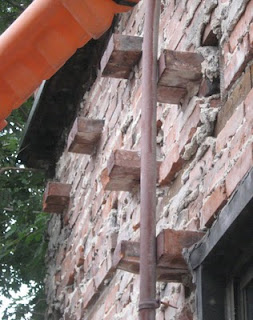