Last weekend I saw a whale, a fox, and enormous moose prints in the neighbour's strawberry garden. She was so awed by the idea of a humongous moose slouching past our houses that she didn't mind the few squashed leaves.
We drove out to the Gaspé for a few days. It's 700 kilometers (450 miles) northeast from Montreal along the St. Lawrence River. I know this is childish, but it tickles me no end that this same river passes close by our place in Montreal. Most mornings in the summer in the city I cycle by the river. In the Gaspé our windows face the very same river--except that here it's so wide, you can't see the other side. It's no longer a river here but the Gulf: salt water with waves and whales and seals and who knows what else. I don't know near enough about marine life.
I know my way somewhat better around words. Or I thought I did. This weekend I discovered that the word river in English doesn't translate as rivière in French. When I told the neighbour that I like to cycle by la rivière in Montreal, she had no idea where I meant. Where in Montreal was there a rivière? I couldn't understand why she was so puzzled. The island of Montreal sits in the St. Lawrence River! Ah, she said, you mean le fleuve? Ah... right. In French the St. Lawrence River is called le Fleuve Saint-Laurent. I didn't know that the French word rivière refers to a only small waterway. Whereas in English a river can be quite big. The St. Lawrence. The Mississippi.
Here's a word you would only encounter in the maritime villages along the St. Lawrence, and specifically in the Gaspé: cipaille. It's a pie originally made with game and cooked for many hours at very slow heat. The dough becomes infused with the meat juices, the chunks of meat very tender. Nowadays cipaille is made with pork, beef, and veal. A layer of cubed meat, a layer of potato, a layer of dough. Some say there should be six layers. They believe that's the origin of the "ci" in  the name.
In fact, cipaille is a gallicization of the English sea pie--called that either because it once included seafood or because it's eaten by the sea. I don't know. Cipaille is pronounced like sea pie. In the Gaspé it's also called cipâte, referring to the layers of pâte or pastry. The human mind tries to make sense of a word that makes no sense.
For aficionados of Quebecois cuisine who think they recognize the deep-dish tourtières of Lac St-Jean in my description, note that these were originally called cipaille.
A little more about words by the sea...
I brought Linda Besner's amazing new book of poetry, the id kid, to the Gaspé. Her sense of whimsy  blows me away. I'm awed by her dexterity with language, her images, her wild sense of occasion, her grace. She blesses the most mundane of objects--broken chairs, a plastic bag of tomatoes, an eye exam. I sat outside in the sun, facing the sea, reading, feeling wowed by the swing of her words.
Finally I had to go inside to clean the fridge we'd brought with us. We acquired it when R's sister Sue moved into a group home.
But oh. The domestic service R paid to do Sue's cleaning for the past few years seems not to have understood that the refrigerator was included in cleaning. There were many and various stains and dried matter dribbled down the walls and squished between the door hinges. I began to scrub. And grimace. Soak and scratch and pick with a knife. Finally even got a bottle of paint thinner.
I hate cleaning and normally I would have cursed and done it as quickly as possible. But I was still under the spell of Linda's poetry. I tried to find words to describe the different colours and textures I was removing. One puddle looked like the melted yellow fat that gets poured on popcorn in the cinema. Another smudge was green as cucumber skin. I knew that Linda would be able to turn this cleaning-a-fridge experience into a poem. Knowing that made me feel almost better about spending two hours stooped inside a fridge.
p.s. re the photo, those are clouds on the horizon, not coastline. 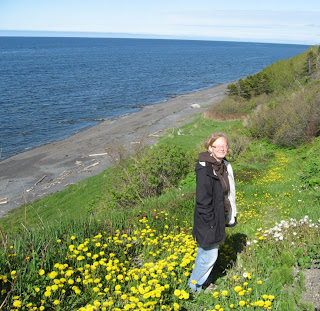