Last week I had an appointment with my hairdresser. She has a chirpy personality. Most often I'm the one who sounds curt. This time she didn't even pretend to make small-talk. She couldn't find the clips she'd misplaced, kept dropping her comb. I finally asked if she was taking vacation this summer. She said yes. Nothing else. Then she spun around and yelled at the receptionist: If he ever walks in here again, you call the police!
Of course I asked what happened. A client has been leaving threatening messages on her answering machine. He knows where she lives, where she works, her schedule. A few guy friends have offered to rough him up, which would be fine with her, except that she's worried he might carry a knife or they'll go too far and she'll be implicated. She doesn't want to call the police because she doesn't trust them.
I think she has good reason to be frightened. I agreed that roughing him up could have consequences. I suggested she get one of her helpful guy friends to accompany her home when she finishes work.
Then, when I left the salon, she grabbed my arm and said, See! I'm the one who should be writing a book!
I'm not sure how we got from her anxiety about this asshole to writing a book. I understand she's frightened and that makes her feel she's at the center of a drama.
But let's face it: in itself the story isn't all that interesting. A young woman invites a man she hardly knows back to her place. She decides she doesn't want to see him again. He begins to stalk her. Of course, her fear is large and real and potent. I'm not referring to the hairdresser anymore, but a possible character. I'm talking about the potential for a story. Even if the worst were to happen, it would still be predictable. Almost moralistic. Look what happens when you invite a man you don't know home. And if the worst doesn't happen, why write this story? To explore the gradations of fear?
...Okay, there's stuff you could do to make this story interesting. For sure.
My point is that what makes a story interesting has virtually nothing to do with the original event that sparked the idea for a story (assuming you're the kind of writer who gets ideas from things that happen). Writing fiction is about character development, conflict, ideas, atmosphere, language, plot, images--not about things that happen. Lots of things happen. They can happen quickly and tear your life asunder. For example, someone close to you has a car accident and dies. It takes only an instant to happen. If you want to turn that emotionally volatile experience into a story, get ready to spend months, perhaps even years shaping it. And if, in the process of writing, you don't see new directions that will improve the story as a story, then you're probably missing the point. In my opinion. 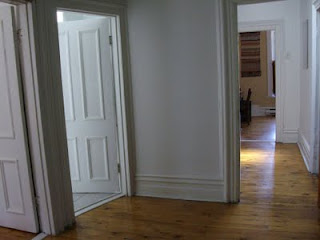