when can I have that test again?

Wandering around the house, gently stoned, so I might as well chat with you for a while.

I had a medical exam this morning that required sedation. The consent form I signed had a longer column about the after effects of sedation than the risks of the procedure. (Minimal chance of perforation. What's a little hole in the esophagus?) However, since I was being sedated, I had to sign that someone would be fetching me, that I would not drive at all today, I would not eat or drink for two hours, and for the rest of the day I would not make any major decisions. For someone who can spend long minutes trying to decide whether a sentence needs a comma or not, and an hour later return to that same sentence again, I wondered what was meant by a major decision. Selling your house, the doctor explained.

I wasn't conscious during the procedure. My last memories were of the technician making a comfortable bolster of blankets behind my back and hips to keep me on my side. But while I wasn't conscious, I had the most wonderful dreams! I didn't want to wake and even after I dressed, I lay down on the stretcher again. I wanted to continue that snooze, but no, there was another patient, and I had to move along.

The technician asked if the person who was coming to get me was downstairs. Yes, I said, downstairs. During Covid times no one wants people wandering through hospitals.

R wanted to take the day off work, but I said I would sooner call him if I needed him. I knew that what I would want most--as soon as I was allowed to swallow--was a cinnamon bun and a latte. I didn't need him with me for that.

I sat in the waiting room for a while and sent a few notes and texts. I calculated that I'd had a half-hour snooze after the test, another half hour in the waiting room, and I could now start walking up Côte-des-Neiges to a patisserie and from there to a park.

Maybe I lamented a little too dramatically in the patisserie that they didn't have my favourite cinnamon buns. OK, OK, there were lots of other excellent pastries to choose from.

My cardiologist called when I was in the park to ask how I felt after the procedure. Fine, fine, fine! I told him where I was and that it wasn't cold out and my pastry was really good and could anyone think of a greater way to spend a Tuesday morning?

Are you alone? he asked.

How are you getting home, Alice?

There will be stairs and escalators. You have to be careful. Your balance and your judgement are impaired. You think they aren't, but they are. You need to hang onto the banister. Not with your bare hand. Put your glove on, and when you get home throw that glove in the wash.

Have I said this before? I love this guy. He didn't comment on me being alone. He dealt with the fact that I was alone.

I walked slowly and carefully to the subway. I paid attention stepping on the escalator. I grasped the bannister. I could hear the train coming and knew I could catch it if I ran, but I didn't. I was being so good.

Then, of course, I had a long wait for the next train, but that was OK. I had nothing else to do today but get home safely.

I was waiting, minding my own business, when two police officers approached. Ça va, Madame?

Oui, ça va. (Why weren't they asking anyone else? Could they tell I was impaired?)

What are you doing?

I'm... waiting for the subway. (Maybe it was against the law not to be accompanied when I'd signed a consent form saying that I would be.)

One opened his hands at me. Where is your mask? he said loudly.

Oh shit, my mask. I fumbled it out of my pocket, began babbling that I always wore a mask but but but... (Could they give me a fine??????)

They moved along. The subway came. Once I was carefully and safely seated, I called R who wanted me to let him know every step of the way how I was getting home. I told him I was fine except for having forgotten my mask. As the train pulled into the next station, he heard it announced through my phone.

You're at Namur? he asked. You're going the wrong direction.

I started laughing. Gut-deep hilarity. I couldn't believe it! I was standing at the door, stamping my feet, laughing so hard.

He was saying, I want you to get off the subway and take a cab!

I was trying to tell him that I was OK but I couldn't stop laughing.

I am home now. If there were further signs of impairment, I am not aware of them. 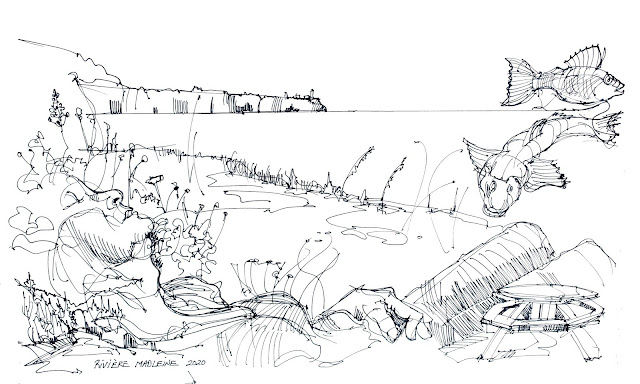 Drawing of Alice napping in the Gaspé done by R.