older, wiser, younger versions of myself 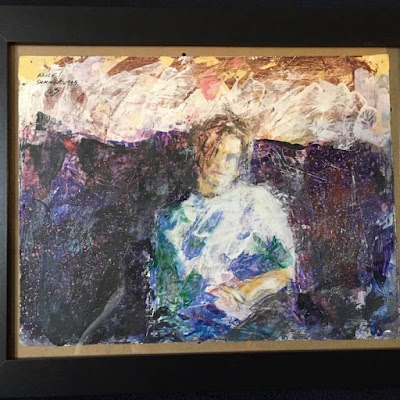 A while ago I asked R if he would give me the paintings he's done of me. I love these older versions of myself in different places where we lived or travelled. I am honoured to be with someone who sees me in a way that I can look back at who I was. I recognize myself.

Even the grotesque cartoons. I've included a couple of those too. 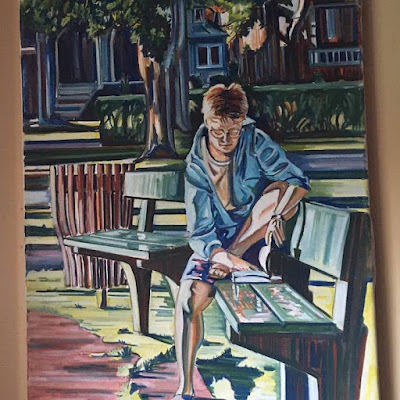 A park in Outremont near where we had an apartment. 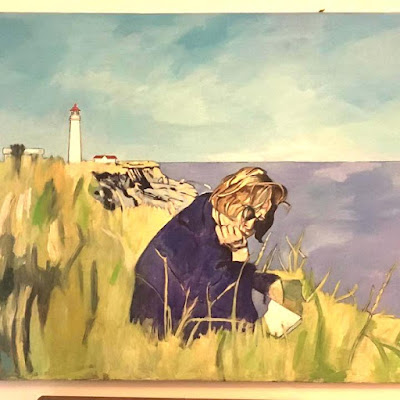 This one looks yellow because it's in a room with not much light and it's too large to take off the wall. There's another version below.

Where am I sitting? Where else? In the Gaspé.

As far as I know, I never wanted to be a ballerina, but I've got this one over my desk. 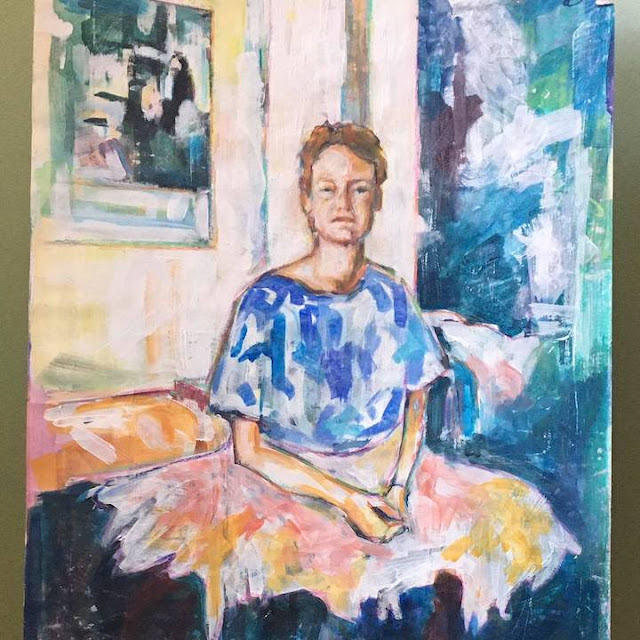 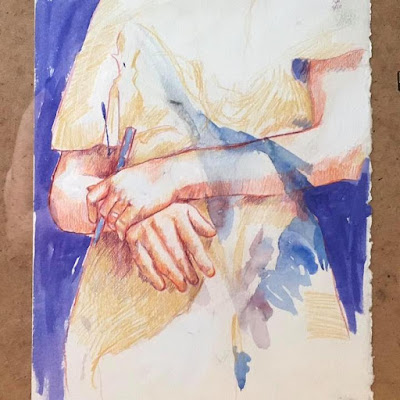 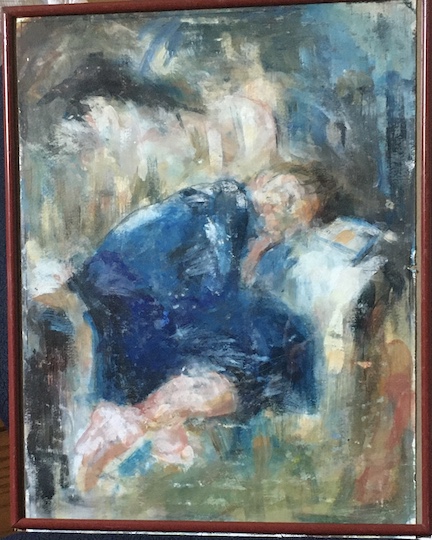 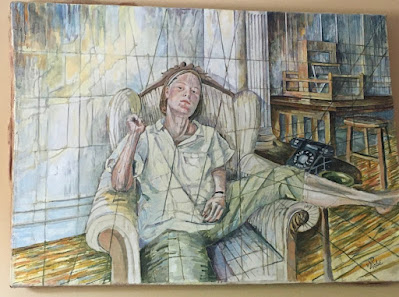 Same armchair as above. We salvaged it from a sidewalk and had it reupholstered, but I always regretted the scratchy, beige upholstery fabric that I let the upholsterer convince me we wanted. The chair was eventually returned to the sidewalk. Within an hour, it had found a new home.

In the background, my table loom. 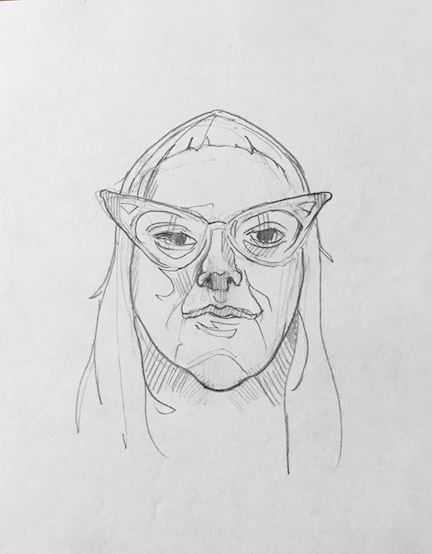 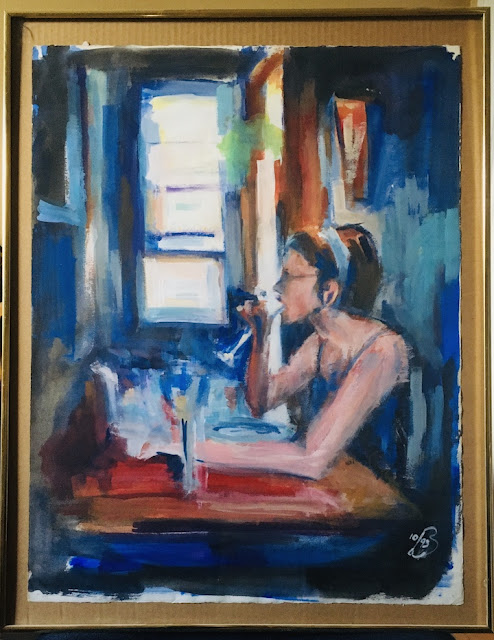 I have been known to drink wine. 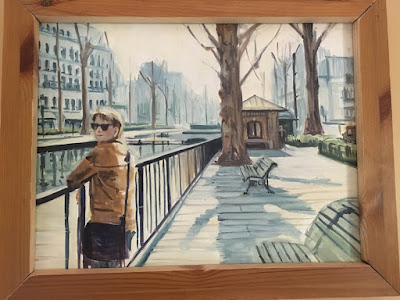 Paris. I'm wearing an old suede jacket that used to be my father-in-law's. He was short. I saw the jacket on top a pile of clothes for the charity bin. I asked if I could have it. R and I went for a walk in the woods. When we returned, I saw the jacket on the clothesline. His mother had put it in the washing machine to clean it for me. Years later, when I took it to a drycleaner, he winced and said someone had put it in a washing machine.

I wore it for decades until seams started to rip. I've now cut it up into pieces to use for patches. 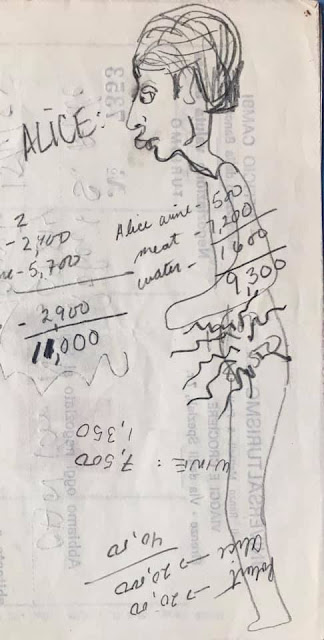 This was done on the back of a hotel bill from when we were in Florence in the 80s. Total bill was 84,500 lire.

I had excrutiating menstrual cramps and was in a foul mood. (In case you can't tell.) 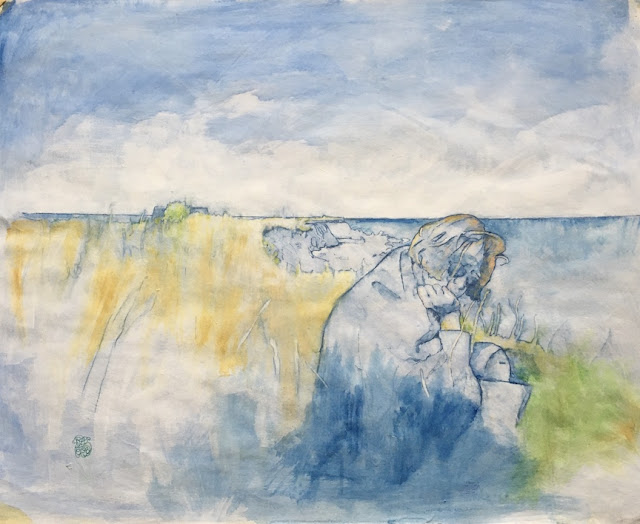 Paintings by R aka Robert Aubé aka Dr. Alphoneyous Nitpicker. I'm not married to Nitpicker, though I sometimes (increasingly) feel like I might be living with him.