I took a break from blogging because I was deep into the final edits of a manuscript. I've now done what I can do with it and sent the pages away.

Slowly I've been getting around to all the things I let pile up. Top on the list is clean my desk. Lots of scraps of paper with sentences, scenes, details that were cut and that I never did figure out where to put but was loath to throw away. They've now been swept into the recycling bin. I don't write in pencil so I don't know why there are drifts of eraser rubbings. Or maybe that's what dust looks like when it's been left to accumulate and gets shoved around. I believe I only use one pen--a fountain pen--though there are dozens of pens and coloured markers when I finish picking them all up. 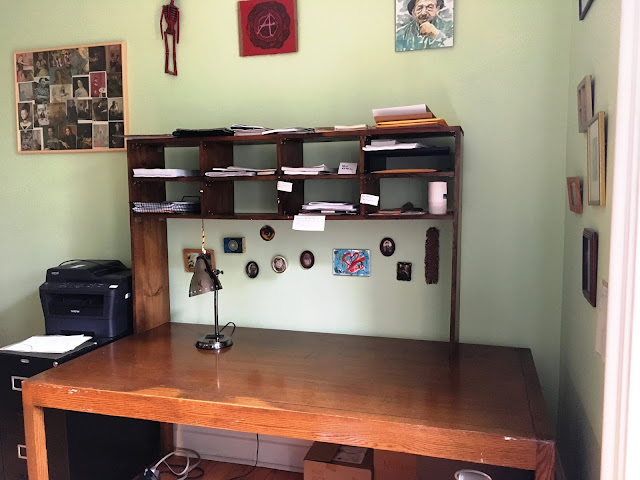 My desk is a boardroom table that I inherited from a friend when he left Montreal. The shelf structure up top is adapted from the design of the desk I used at the Banff Writing Studio in 2007. I was working on a novel with nine points of view. The shelves helped me keep the paper narrative chunks separate. I came home and asked R to build me something similar.

The shelves look sparse now but I've packed away the notebooks and research material I was using. Before long they'll be full again as I start toying with ideas for what I want to work on next. There are already a couple of notebooks and folders. A tantalizing book with "object-based research" in its subtitle.

For a while now I've been wanting to sew some pockets inside my knapsacks. They're never the right size or where I want them. Easier to add them myself. I cut up squares of funky upholstery material, silk, velvet, corduroy. 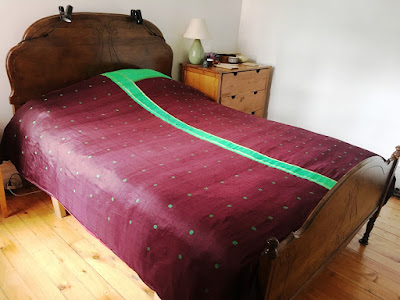 A friend gave me one of his mother's sarees since she cannot wear them anymore. He thought I might make myself something with the silk, but it's very fine and I worried that my sewing machine would chew it. Ideal would be as little stitching as possible. I backed it with cotton to make a duvet cover.

His mother made the best flaked shark curry. Once we spent a morning alone together when I'd been there overnight. She was unsure what to give me for breakfast. She had no bread. We finally settled on sliced mango. 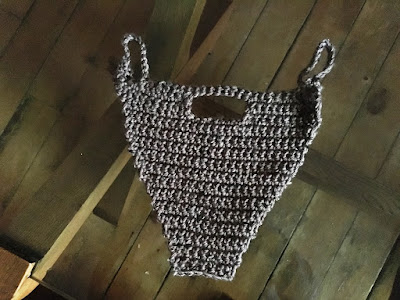 Dr Alphoneyous Nitpicker needed a new beard since he will be exhibiting paintings at an upcoming group show in October. Originally from Greenland, Dr Nitpicker had an illustrious career as a surgeon and short order cook at the Hospital/Snackbar at the University of Gimli, Manitoba. He's now put his scalpel aside and left Gimli in order to live in Montreal and paint. He is known for his many inventions including a barbecue that also works as a respirator in the ICU, as well as his chickenless nugget machine. The chickens feed chick peas into it. (I am not responsible for Dr Nitpicker. I only make the beards.)


I haven't gone through my filing cabinets for years and thought I would try to thin them. Among the stack of folders I found two would-be novels that I wrote in the 90s. It's been interesting to read them and see what I thought made a story when I was younger. They're mostly interconnected character studies that progress along a faint narrative arc. One is set in Toronto in the mid-80s, details taken from when I lived there as a grad student and later worked in restaurant kitchens on Queen St West. The writing reminds me of the places and the people I knew then. Annex apartments, restaurant kitchens, bars, Queen St W in the 80s, trying to teach bored students who hadn't read the material. I may end up keeping all the folders for nostalgic value. 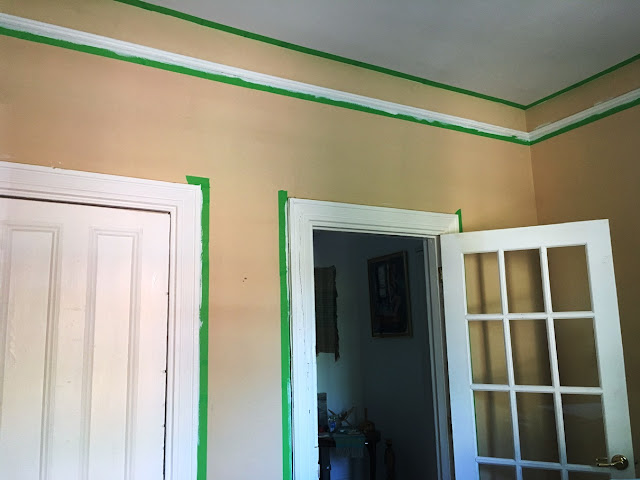 Another task I'm slowly getting to is painting my very small sewing room. You would think a small room would take no time at all to paint but there are two doors and one long window and wood trim around the ceiling and baseboards. The ceiling is 11' high so there's a lot of climbing up and down the ladder. Rolls and rolls of masking tape. I'm painting the walls pale winter straw. That was the colour I was looking for. The paint name is something else. The pic is before I started.

The list of things-to-do is still longer. Eventually I'll hear about the manuscript I sent off.