It's not an ethical/ecological struggle. I have a cupboard full of tubs with lids, parchment paper, waxed cheese cloth, jars, old yogurt containers. Lots of reusable or recyclable options. But I wasn't at home.

Yesterday was my first stint at the non-profit, community coop grocery store in my hood. In order to be a member of the coop and benefit from the lower prices, one has to work in the store for three hours a month. I opted not to tackle cash because I don't like handling money. I would have liked to work in the kitchen where about-to-expire vegetables are turned into soups, stews and pickles, but those slots are filled well in advance. I decided to work "on the floor". That meant keeping the shelves stocked, the apples and oranges and grapefruits heaped, bagging carrots, spinach, arugula, cutting and packaging pieces of cheese. 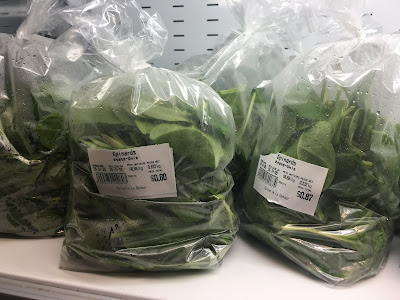 There are many things I can do but yesterday I discovered that I can't make air-filled plastic balloons to keep greenery loose and fresh. I got the spinach and arugula into the bags no problem. I got the twist ties on. I punched the correct code into the scale, weighed, and tore free the sticker for the bag. But my bags all sagged. I watched the person training me, but he simply seemed to have the knack. Bingo, he closed a bag and there was air trapped inside. How did he do it? Comme ça, he said. No matter how many tries, my bags looked lousy.

Okay, then, let's try this. Cutting cheese off a slab and wrapping the pieces in shrink wrap.

Oh no! Not shrink wrap! Small boxes, big boxes, the teeth never work for me. The large boxes with the little plastic button that's supposed to force the film onto the teeth are the worst because I only end up with more possible film to ruin beyond use. And this box had lost its button! I tried every sleight of hand I could think of to tear the wrap across the teeth. I even considered putting the box on the floor and straddling it. I grabbed a knife to stab the wrap. I pulled every which way, gave up trying to make nice squares of plastic wrap, settled for jagged towels of it, bundled pieces of cheese inside, smushed the leftover edges around the back. Cheese on a cling film cushion. 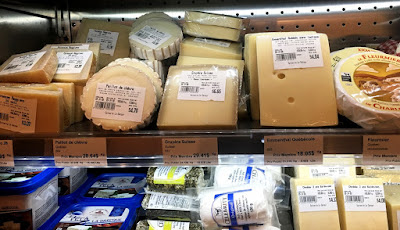 The fellow stopped by to see how I was doing. Okay, I said. He picked up a piece of cheese to see why it didn't lie flat. I told him I was shrink-wrap handicapped. Joke? Ha-ha? I got a weak smile. He showed me his technique for getting the buttonless teeth to make nice, neat squares of shrink wrap. It looked easy, it looked good, but I knew the teeth wouldn't oblige for me. Then he showed me how to fold the film across the cheese. He explained the film had elasticity so that if I pulled it just so, it would stretch smoothly. I said I would try.

I packaged nuts, no problem. Tamari almonds don't have to be in balloons like spinach. I kept the oranges and lemons and apples and grapefruits heaped. I cut some day-old baguettes into cubes for croutons. Why there are baguettes left at the end of the day, I don't understand. The bread at this store is fabulous! 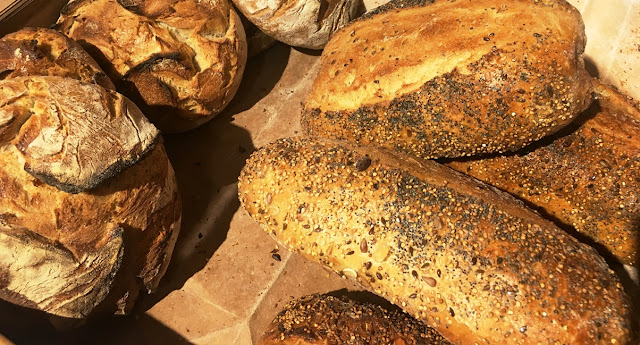 Shrink-wrap challenges aside, I'm happy to play a small (very small) part in the coop which is part of the Bâtiment 7 project in Pointe St. Charles in Montreal. A repurposed CN train workshop, Bâtiment 7 is now a community centre with art space upstairs (painting, pottery, metal, wood), and so far a grocery and tavern downstairs.