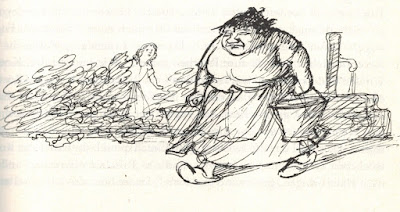 Do you wear an apron? I'm pretty sure my mother wore one when I was growing up but I didn't take the habit with me when I left home.

I wore one the year I had a job baking cakes in a restaurant, because I didn't want melted chocolate or egg yolks dripped and smeared on my clothes. The kitchen wasn't so fancy that any of us wore full kitchen whites, except for the supper chef who gave himself airs. He had trained in France. The rest of us wore jeans and aprons. That was in 1981? 82?

At home I only started wearing an apron after I splashed a beloved sweater with hot olive oil. I opted for the bibbed apron over the skirt-style apron my mother used to wear. 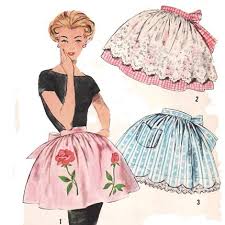 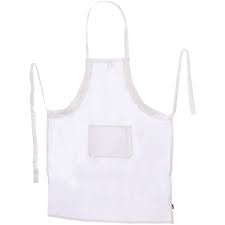 That's not a picture of my mother and I haven't included a photo of my apron because it's long ago acquired a patina of avocado, tomato, orange juice, chocolate, oil and whatever else I've wiped across it over the years. An apron is handy when you need to blot your hands or clean a knife fast. I do wash the apron but the stains are there to stay. That's why they're called stains. (Stay = stains?)

I've been thinking about aprons because I want to know what kind of cloth would have been used to make an apron in Grimms' fairy tale times. 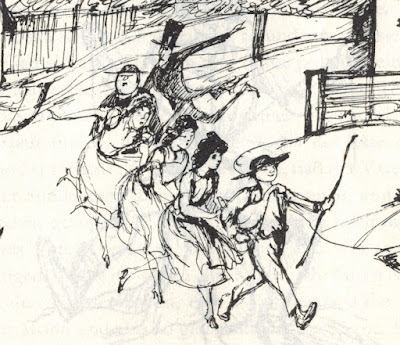 As far as I can discover, the common household fibre at that time in Europe was linen. Linen is made from flax. There are a few Grimms' fairy tales about the spinning of flax--most often when an irrational monarch demands that a girl spin flax into gold. 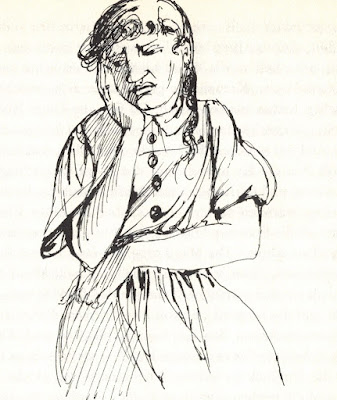 Last year I happened to wander into a shed in Austria where I saw honest-to-goodness flax. Even in the dim light, the fairy tales about spinning flax into gold suddenly made sense. 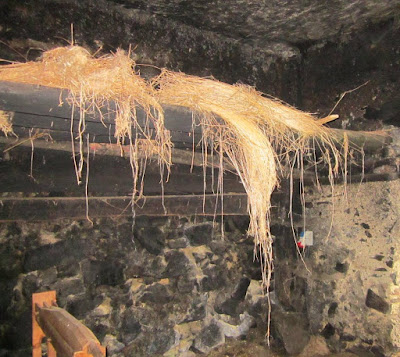 To get flax supple enough to spin into yarn, the stalks are threshed with a flail, followed by retting, then scutching, AND THEN they are heckled with heckling combs!

If I'm ever heckled when I'm standing on stage, I hope I have the presence of mind to point out to my heckler that I am not a stalk of flax.

And here's a linguistic/textile tidbit I came across while looking up the history of cloth. When cotton was first introduced to Europe in the 1300s, people knew only that it came from a plant, and so they imagined there were trees that grew in India with tiny lambs on the ends of its branches. This myth lives on in the German word for cotton which is baumwolle. Literally: tree wool.

If you're wondering how far off the beaten path I went to find an old shed where flax used to be threshed, retted, scutched, and heckled, here's the view. The first snow had blown in the night before. Guess from which direction. 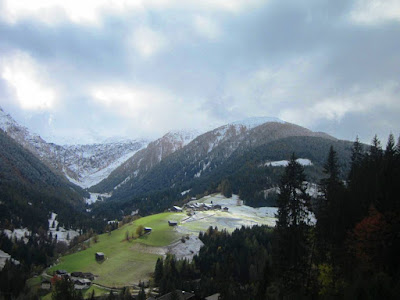 Making linen was a laborious process, but in countries that didn't have ties to cotton-growing colonies linen was still the least inexpensive textile until partway through the 19th century. Nightgowns were made from linen. Underwear was linen. Shirts were linen. Collars were linen. Skirts were linen.
When the brothers Grimm were researching and writing their fairy tales, aprons were made of linen. And people wore aprons. The word has been around in English since the early 1600s. Men wore aprons specific to their trade--carpenters, butchers, stonemasons, cobblers...

Even the witch in "Hansel and Gretel" wears an apron. 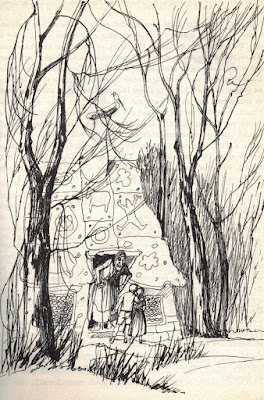 Illustrations of aprons courtesy of Fritz Fischer in Grimms Märchen (Bertelsmann Verlag, 1957)
Posted by Alice at 9:21 AM