I wish I'd had my camera because she had such a good-natured face.
This is what her hat looked like: 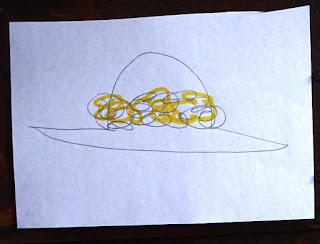 Yellow fake flowers and a straw hat she'd smashed onto her grey curls. She was sitting on a bench outside a pharmacy, singing in a quavering, crooning voice that reminded me of the popular Québecois singer, La Bolduc (1894-1941).
https://www.youtube.com/watch?v=WbGSHtwzOfs

It's not a style of singing that's attractive to our modern ears. It sounds almost like complaining, except that the accompanying accordion or fiddle is in party mode. The woman outside the pharmacy didn't have an instrument, but in the interlude when one would have been playing she stopped singing and danced her fingers along in the air. She rocked on her bench as she sang. She was short and chubby and her feet didn't quite touch the ground. Her hat was ugly but cheerful. She was enjoying herself, even as she seemed aware that people were edging away. She couldn't stop herself. She had to sing.

Then she noticed that I was listening and she broke off. Oh, I'm sorry! I don't know all the words. I make up the ones I don't know. That's awful, isn't it? I should just shut up.

That's okay, I said. What's wrong with making words up? To my ears it seemed the words she'd made up matched the rhyme and rhythm of the song. And if some of them were nonsensical, many lyrics often are.

No, no, she insisted. My father used to say that only an idiot would sing if she didn't know all the words. He said that was the proof I would never amount to anything in life. She rounded her eyes at me and bobbed her head to make her point. And then she began singing again, wagging her hands in the air, rocking on the bench, smiling.

She was 70 or 80 years old. Her father was probably dead. She had outlived him and she was singing -- out in the city where anyone walking by could hear.

But also still hearing the voice of parental disapproval. It leaves such an echo.