When are words foreign and what do about them when they appear in text?

This affects you even if you're not a writer, because you're a reader, right? You're deep into a novel where the character has travelled to... Madrid, say, and she wants to buy soap and can't find it. She's looked up the word in her Spanish-English dictionary, and has tried and tried and tried again to ask for jabón, except that she doesn't speak Spanish and doesn't know j is pronounced like an emphatic h in English (because in Spanish h is silent), and the accent means that you truly have to sound that syllable stronger. She's rubbing her arms and miming washing, though what she actually wants to wash are her underpants. The scene doesn't work with the word soap. Spanish is necessary. 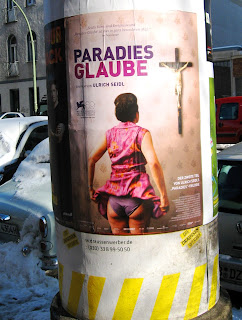 Even outside of desperate linguistic situations, a writer might simply choose to use foreign words. There's that old saw about local colour. Or the simple fact that a person travelling usually adopts some local lingo. In Berlin you take the U-bahn, not the metro, which is what you would take in Montreal.

If you write or read about anywhere else but where you're at home, the words of the place seep in. That's a good thing, right?

And once they've seeped in, are the words still foreign? In Montreal even Anglos buy beer at the dépanneur. The word has been folded into the lexicon. 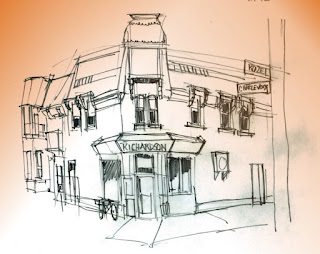 To the reader, however, the word might be foreign. Does that call for italics?

What about words that aren't so obvious? A character steps into a patisserie and asks for pain au chocolat. That's what he would order because that's what it's called. But an English reader might do a double take, wondering why anyone would order pain in chocolate. Does it come in raspberry too? The hesitation only lasts a couple of seconds. The reader isn't stoo-pid! Obviously it's a French word for a French pastry. Keep reading.

But in that instant of hesitation, the bubble of fiction was broken, and even if the bubble seals again almost immediately, why break it? 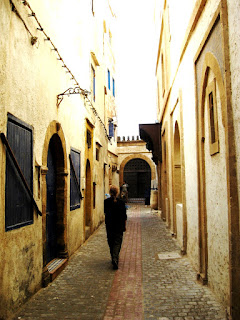 Sometimes the foreign word is the only word that fits. There is no English equivalent for medina. That's me walking through the medina in Fez.

Or the foreign word sounds right because it's the word that would be used in a particular situation. My character in Vienna doesn't ask for coffee. She orders a kleiner brauner because that's what it's called. Sure, she could have said cappuccino or latte. The waiter would have brought her a kleiner brauner anyhow--and she would be the one who would look disobliging. 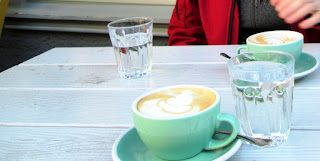 There are times I like the sound and feel of a word in another language, and for those readers who understand that language, I want to share it. In the new manuscript I'm working on, I describe marmormehl. Literally translated, it means marble flour. To my ears, marble flour does not have the resonance--the sense of marble being ground--that the German does. So I can't help myself. I need to write marmormehl. Though I then repeat myself by writing marble meal in English. The repetition sounds fake--I agree--but what about the convention of writing isn't fake? 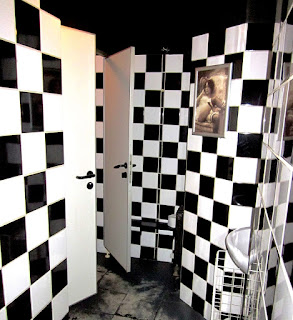 But what about the reader? What about words--like pain--that mean one thing in French and another in English? Using italics lets the reader know it's not the English word.

When I'm reading and come across words I don't understand, I'm grasping for meaning. If the novel is being told from the point of view of a character who wouldn't understand either, that's fine. We're both lost.

Just now, however, I'm reading a novel with lines of dialogue in another language the characters understand but I don't. English words don't follow and the context leaves the meaning unclear. I'm in the dark and I'm the reader! This may be realistic, but is it wise? 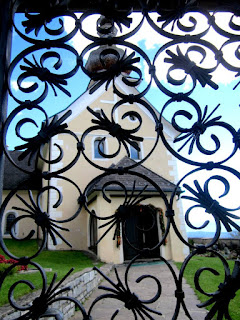 Someone argued with me once about not using italics for foreign words because it posited the reader, who might understand that foreign language, as an other. We live in times that have politicized font.

I'm not trying to make my reader feel like the odd one out, but I also don't want to confuse the reader. I see the value of using a small visual tip that a word is different from the rest of the text--to let the reader know a character isn't trying to buy pain. 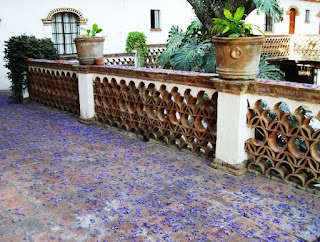 These are jacaranda blossoms on a terrace in Mexico. Jacaranda was originally a Tupi word adopted by Portuguese, then adopted by English. No longer a foreign word. This is how language grows.