Old as in the Egyptians were doing it, and it's still being done as it was done then. It's called water gilding in English. In German, it's called Branntweinvergoldung, which means brandy gilding. Interesting, the difference in emphasis.

When I was in Austria in October, my cousin, who is a master gold-leafer, took me into her workshop. This past week I've been transcribing my videos, looking up words, and doing my best to understand. So many details. There are up to 20 steps--and one can't tell if a mistake was made until the final step when polishing the gold.

The first time I saw gold leafing done (when I was younger), my uncle claimed to use a wild boar's tooth as a polisher. It's since been discovered that agate has the same degree of hardness as tooth enamel, so now agates are used. Easier to come by than wild boar's teeth. 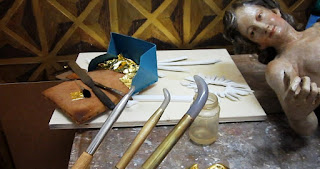 The agates are cut and shaped, though, as if they were teeth. As I remember the colour of my uncle's wild boar tooth polisher, it was the same translucent grey.
What you might also notice on that suede cushion on the table is that my cousin has several sheets of gold leaf to hand. You might think it's like aluminium foil. Each leaf is four thousandth of a millimetre. It doesn't only crinkle, it dissolves into flecks at the slightest wrong move. She flips the leaves with her icing spreader knife, slices pieces to fit, and drops them, one by one, with a brush onto the prepared surface.
It looks easy to watch. Then she says, do you want to try, and of course I ruin my evanescent wing of gold. Nothing to do but lick the insubstantial shiny specks off my fingers. It'll be the only chance I ever get to eat 23 karat gold. 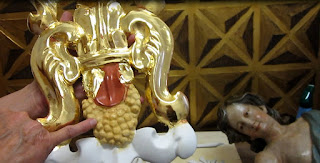 This is a demonstration piece that shows some of the steps in gold-leafing. The dull yellow is bole made of volcanic earth and other ingredients. Bole can be bought, but this bole is made from a recipe handed down from our great-grandfather. That red tongue is bole as well. The white at the bottom is gesso. The bole goes on top of the gesso. The carving is of basswood. Some of the gold has been burnished, some hasn't yet.

Here's a fellow anxiously awaiting his turn. He had the bad luck to have been restored by someone who didn't clean him properly before applying gold leaf, so that the gold has begun to flake off. Here, he will be cleaned, regilt, and freshened up. 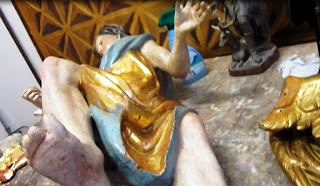 A huge thank you to Monika for her patience and expertise. Dankeschön!