pottery in the topsoil / horse at a gas station

I went for my first long cycle of the year today. By long, I mean 30 k, which is long enough for a middle-aged woman with a cardiac history. We headed out along the Lachine Canal, where once shipping, warehouses, and industry reigned. 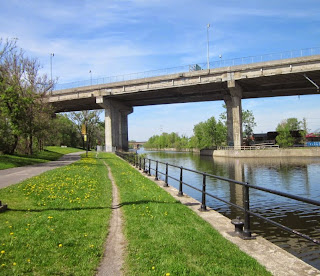 The Lachine Canal path eventually connects with the St. Lawrence River. We did the loop and cycled home. 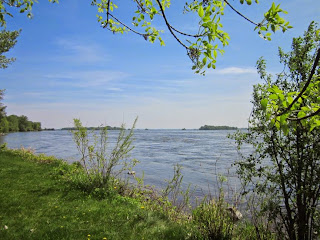 Today is a holiday in Canada. When I was growing up in Ontario, it was called Victoria Day. I believe it still is. Queen Victoria's birthday. She was born in 1819. Talk about colonial servitude! Here in Quebec it's currently called Fête des Patriotes, which I'm not going to explain because it might well be called something else in a few years.

When I was a kid, the holiday was marked by fireworks, which I miss because I like fireworks. On my own personal calendar it was also the day I first got kissed. I was 12 yrs old. A boy by the name of ...? walked me home from fireworks at the baseball diamond. When I turned into my driveway, he grabbed me by the shoulders and kissed me roughly, then shoved me away and said, "You're no fun." I've never forgotten the words nor the tone. I am probably still "no fun". I can only suppose that people who like me aren't looking for "fun". I have always wished I could let ...? know that I didn't find him "fun" either.

I did some work in my garden this weekend. My arugula, beets, carrots, onions, and snow peas are up. My rhubarb threatens to take over the garden which, so far, is okay, because we love rhubarb. I was emptying a few bags of topsoil that we bought at the hardware store and found this in two separate bags, which makes me wonder where the soil comes from. 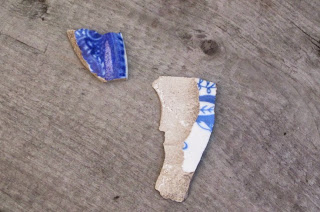 Yesterday when R and I were out walking along Notre Dame--a fairly busy street in Montreal--we heard the prolonged whinny of a horse. There was a gas station on the corner, and there was the horse. Note that he was not at the pumps. He was outside the convenience store. A man stood next to him, holding his halter. Both were standing calmly, except that the horse kept whinnying. Or maybe it was neighing. I'm not familiar with horses, so I don't know the difference between a neigh and a whinny, but I just listened to both on Youtube and they sound much the same to my horse-uneducated ears. The horse did not seem to be in distress, but he kept calling until we had walked beyond being able to hear him.

As we got closer to home, I stopped in a store to buy milk. The young woman at the cash was wearing a 1960s green and white gingham baby doll nightie. I wasn't sure if it might be a dress, so I stood on my tiptoes (I'm short) to see behind the counter. It brushed her upper thighs. It was a nightie.

If I were to describe scenes like this in fiction, no one would believe them.