to be or not to be / shakespeare in spanish class

In my Spanish class we are now attempting to learn when to use the verbs "ser" and "estar", both of which translate as "to be".

In English, we only have one verb, "to be". I am Canadian, you are thin, he is fashionable, she is exhausted, we are firemen, the cups are on the table. It's all "to be".

Spanish has two forms of "to be", which are used in different circumstances: defining location, inherent physical characteristics, transient states of being, psychology, identification of nationality or profession, idiomatic expressions, etc. It's not one of those half-empty/half-full conundrums where you say POtato and I say poTAto. The wrong "is" in Spanish is just plain wrong. A mistake.

So one student, who likes to lighten the mood in the class, asks the teacher how she would translate "To be or not to be"? The teacher isn't sure. The class begins discussing whether the question is about a state of being or something else. Although the student who asked the question is a Francophone, he said, "To be or not to be" in English. The teacher speaks only minimal English. She asks what the line is in French. "Être, ou ne pas être." That doesn't help her, since French, too, only uses one verb for "to be". (Why is it that everyone claims Spanish is the easiest language to learn and here we have two forms of the most common verb, where other languages only have one?)

A bumbling semantic discussion ensues. We don't yet understand how to differentiate between the verbs "ser" and "estar", and the teacher isn't sure about the greater context of the line. She clearly doesn't spend her evenings reading Shakespeare in translation. Up until a certain point in the discussion, the name Shakespeare isn't even mentioned. When it is, a genteel, older woman says Shakespeare took the line from French. No, he didn't, I say. He wrote it. She shakes her head. It comes from French. From where, I ask? She doesn't know, but some of the other students wonder too now. They know Shakespeare made the line popular, but was it his? I insist that it was first written in English by William Shakespeare.

This all goes back to a deep-seated French conviction that all things beautiful and expressive are évidemment French. Anglos are clumsy louts who don't know how to dress or enjoy themselves, and speak a bastardized, predominantly practical, flat-footed language. Any of you who are English writers living in a French milieu will at some point have met a French speaker, who may or may not be a writer, but will still affirm with great aplomb that French is the more beautiful language with all the poetry.

Back to the Spanish class: the to-be-or-not-to-be question was never resolved by us. I've just looked it up. Umpteen translations available, but each begins, "Ser, o no ser..."

The woman who'd said the line was taken from French never admitted that I was right. She shrugged and said, En tout cas... which is the well-bred version of Whatever. 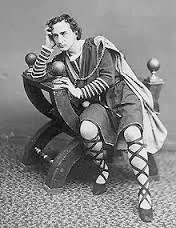 I didn't dress R up in costume to pose for this pictures. It's Edwin Booth acting Hamlet in 1870.
Posted by Alice at 10:53 AM