The Gaspé peninsula is in northeast Quebec: a stubby thumb that sticks into the Gulf of St. Lawrence. We've been coming here for almost thirty yrs and finally R bought a derelict house. Sagging floor, burst water pipes, condemned chimney, broken furnace. We took a chance because the front windows look onto the sea.
Usually when we come in the fall, the weather is cooler, the trees are starting to change colour, and the tides are higher.
This year we got here early. The breeze off the water was warm with great beds of kelp swishing in the lazy waves. Two villages along there was a shack on the beach selling hand-cut fries and shrimp poutine. We bought fresh cod at a small fishery with a couple of boats out back and a window through to the room where the fish were being cleaned. We pan-fried fillets we served with lemon, salt and pepper. We get our yearly quota of mercury on these trips to the Gaspé. The neighbour told me to pick as many green beans, carrots and beets as I wanted from her bountiful garden. We’d brought wine. Wine to the tune of the coral and peach sunsets on the water.
Big plan this trip was to paint the house. I wanted a warm colour because, when we drove out two winters ago, the frozen waste of land and water was so bleak and monochromatic. Even the fir trees looked black against the snow. Snow and snow and snow and more snow. Sometimes the sky was blue and sunsets blazed--at 3:30 in the afternoon. Then it got dark.
Most of the houses along the coast are white or such pale washes of cream or beige that they might as well be white. In the winter they disappear against the frozen snow and ice. There’s only the odd coloured house.
The winter that we drove out I felt heartened by those few bubble gum pinks, robin egg blues, Irish greens—a shout of colour in all that white, grey, and black landscape. 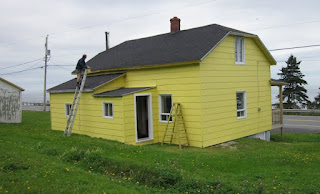 I picked yellow. When the sun shines, the house is the same colour as the dandelions in the grass. We'll paint the front porch next trip. The edge of rusty building on the left is the shed. The house was almost that blotchy.
Funny coincidence: the car we rented happened to be a yellow Fiat. One of the local artists, Claude Rioux, a sculptor whose house you can find by the dragon out front--the size of a cow, you can't miss it--stopped to tell R that he liked how our house and car matched. R told him the car was rented, but he insisted. J'aime le concept. 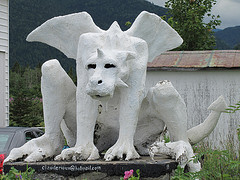 A smaller project was to keep the beach glass I collected in a  jug I could set in the sunshine. The idea was suggested by Carin at http://matildamagtree.wordpress.com/2012/03/11/here-is-a-day/ 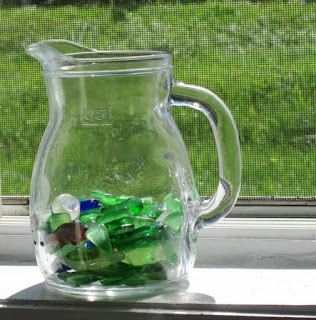 We also walked along a new section of the Appalachian Trail, which I'll write about in another post.
Posted by Alice at 10:36 AM