In January I had two heart valves replaced with mechanical valves. A couple of weeks ago I asked for a copy of the OR report. Who knows, I might one day write an essay about the surgery. I thought I could quote a few fancy words... atriotomy, cardioplegia, anterior leaflet.
I expected the report to be a template piece of writing--routine dissecting, exposing, implanting, suturing. An operation is the one time in your life when you crave normalcy. Status quo. No excitement.
Everything proceeded as per usual until the surgical team discovered that a pledget was missing. "We looked for it for quite a long time." How long is a long time when a patient (ME) is under anaesthetic, with her heart stopped, on a heart-lung pump? And what the hell is a pledget? To me the word sounded like a sharp, poky instrument. I'm going to probe into this septum here. Hand me a pledget.
Unable to find the missing pledget, they had to reopen the left atrium which had already been sutured shut, and poked around until they found it. "We were extremely happy about this." Me too.
Of course, I wondered that no one mentioned this hunt-the-pledget game, which extended the time I was under anaesthetic. I told R who suddenly remembered that the surgeon had informed him after the surgery, but at that point R was in no state to absorb much beyond the fact that the new valves were in place and I was alive. Given the circumstances, I understand. But the doctor should have told me when I was conscious and well enough to comprehend. Ding! Ding! Ding! Guess who the patient is? Guess who speaks for herself?
This, by the way, is a pledget. It looks innocuous enough. Still, nothing you'd want to have sucked up an artery. 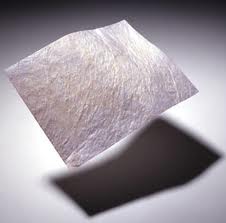 Here I am three months later. I've been diligent about walking every day. My tolerance for physical activity is better than it was pre-op. I can climb a hill (slowly) without huffing and puffing. People tell me my colour is better.
My left hand is still partly numb due to pressure the anaesthetist exerted on a nerve for the duration of the surgery. I have to assume that was necessary, because otherwise it would be stupid. I've been told that it can take up to a year for full sensation to return. That's a nuisance because I'm left-handed, but fortunately I'm not a musician--or a surgeon.
Apparently some people have no appetite after heart surgery. That's not been my case.
Apparently some people have trouble sleeping, but that's nothing new for me.
Apparently some people are afraid of over-taxing their new valves. I like to use my new hardware.
The valves click loudly which I have not yet learned to love. The clicking sounds and resounds in my chest. I imagine my ribs as the cabinet of a grandfather clock. The clicking distracts me when I'm reading or writing, and keeps me awake when I want to sleep. Earplugs make the noise louder. Ambient sound might help but I haven't yet found an ambient sound that's ambient enough. I prefer silence when writing.
The greatest inconvenience is the blood thinner which makes me feel like a semi-hemophiliac. Every paper cut requires a heavy-duty bandage. I don't even recall bumping into things but I've got bruises. Is it safe for me to cycle? Answer: no. But how can I resist the bike path all summer? 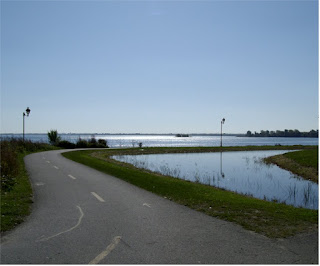