packing to go to the gaspé 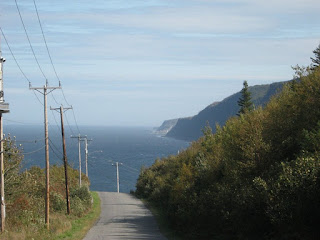 You can find the Gaspé on a map north-east of the Maritime provinces in Canada. It’s a fat thumb of land that juts into the Gulf of St. Lawrence. People who aren’t sticklers for geography would say the Atlantic. The water certainly looks big enough—a horizon of blue from ear to ear—to be ocean. There are whales and seals and other saltwater creatures. Newfoundland lies west. The peninsula itself belongs to la belle province, Quebec.
We have an eight or nine (or ten) hour drive from Montreal, depending on how often we take a break, if we get organized to buy food before we leave or need to stop en route.
I’m guessing that now, in mid-October, the leaves have already fallen. The weather is cooler by the water than where we live in Montreal. Any weather network on the computer can tell me that. Or we can call one of the neighbours who give us the more serious updates on the turnip and carrot harvest this fall. (Lousy because of the rain all summer.)
I’m expecting the coastline to look bleak without the benefit of meadows and wildflowers, yellow autumn poplars, a wind-swirled expanse of ice and snow. At this time of year, it will be neither colourful, nor white. In this in-between time when the autumn becomes grim and winter hasn’t started, even the water will be hard rock and mud coloured. Shades of slate and brown and grey. Except, of course, for the big-sky sunsets which are always stunning. The photo included here was taken on a warm day in September last year. We were walking on a back road to the next village. You can't really see on this picture, but the highway hugs the coastline at the base of the hills.
I’m trying to remember if I left a jacket in the closet last time we were there. Will I need boots to walk on the beach? For sure, mittens and a scarf.
When we went in August, I stocked the kitchen with rice, pasta, flours, pulses. All the food needs to be kept in glass jars. I’d thought I could use the refrigerator as a strongbox against mice, but it’s too damp, all sealed and shut up with the power turned off. The last time we went, I found the breadboard—which I’d left in the fridge for some reason—covered with a fine coat of grey mould. Between mice footprints and mould, I think I prefer the mice.
Last weekend we bought a bread-making machine at a thrift shop for $12, so we can now make bread. That will be handy since we’re city dwellers, used to having a bakery with fresh bread close by. I don’t like grocery store bread. But that means I have to remember to bring yeast.
Is it long-john weather yet? Turtlenecks definitely. Big socks.
I should be packing…