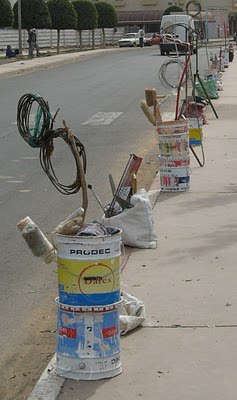 Yesterday I was walking down the sidewalk behind a man carrying a plastic bucket filled with various tools and rags. I recognized the trowel--a flat, diamond-shaped blade attached to a wooden handle. It's used for scraping mortar across bricks or stones to build a wall or a structure. My father had trowels. He built the cinder-block shells for the two houses we lived in while I was growing up.
I had to get to work, but I couldn't get past this man with his bucket and trowel... tromping through the dirty, ankle-high snow along a Montreal sidewalk. The path was too narrow to pass him, the snow on either side piled too high. I had to follow his bucket until we got to a street corner where I leaped across the pond of frozen slush that skirts every Montreal curb at this time of year. I wondered if he was on his way to a job or returning from one. I was impressed by the portability of his trade.
I was reminded of the buckets we'd seen in Agadir in Morocco. We'd walked far from our hotel to look for the bus station. In 1998 it used to be in the center of town--no more than a street where ancient, rusted buses groaned to a stop and took on passengers who waited with threadbare bags tied with twine. People didn't wait in a lineup. When the bus lumbered up, sagging to one side, everyone rushed the door . Elbows, bags, butting heads. Whatever modesty hijabs represent in theory did not translate into civil bus manners. Men smoked with manic intensity, not jumping on a bus until it had already started to pull away--which the driver seemed to know since he kept the door open. The plaster wall along the street was black, pockmarked and corroded with bus fumes. The men hawking tickets rattled off sounds with no vowels. Not a single name we could recognize. We finally asked, "Marrakech?" The man barked something like "Brrrksh!" A bark from deep within his throat, though his mouth never really opened. He peeled off two wee bits of paper with something scribbled across in Arabic and took our money. We tried to ask where we were supposed to wait. He jabbed an imperative finger at our feet. Like... here? He didn't mind taking our money but felt no compunction to enlighten us. We were white people. Strangers. Foreigners. We were supposed to take one of the expensive tour buses down on the beachfront, not hike up into this dirty part of town.
That was the bus station in 1998. By 2008 it had been moved into a large building of several stories (three?) with ramps where the buses pulled up. It had been moved too--far enough from the center of town that tourists weren't supposed to find it. We had to walk very far from our hotel. When we stopped along the way to ask for the "gare d'autobus", we were already so far from where foreigners were expected to wander that no one understood French. (Or seemed to understand--a subtle distinction with which I'm familiar, living in Quebec.)
Along one of the main streets we saw a display of buckets on the sidewalk, all in a row. The buckets held hammers, wrenches, rakes, trowels. Each was arranged with fanciful inventiveness to display the maximum number of tools to advantage--also to catch the eye because there were so many buckets to choose from. At first I thought the tools, splattered with hardened mortar, dirt, and in some cases maybe even broken, were for sale. Then a small truck pulled up, a man darted from the shadows, grabbed his bucket, and jumped in the back.
These were workers, advertising their trades. Each bucket was a concrete affadavit, a pledge of willingness, a record of ability. Each bucket, examined individually, was as interesting as any installation piece.
Posted by Alice at 10:03 AM