About 20 min shy of the train station in Montreal (coming from the west, ie Toronto), the train clanks through Pointe St. Charles. Along the wall of an overpass, where the track skirts the backyards of brick row houses, all summer long a group of artists have been painting a mural. It's not finished yet. More details are being added. But here's what it looked like last week when I was out walking with my camera. 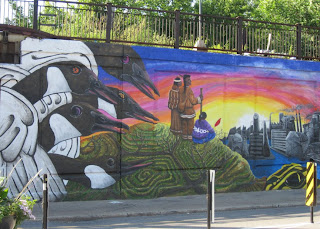 Pointe St. Charles lies on low land that used to be marsh where geese lived. The Mohawk who hunted the geese were, in turn, pushed aside by settlers and nuns who came to farm the land, but this part of the history of Pointe St. Charles doesn't figure in the mural. 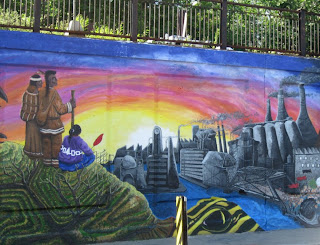 Jump start to the digging of the Lachine Canal in the 19th century, the building of factories along the canal, the rail yards... all the goings-on that made Montreal the city that opened the continent to the Atlantic.

Row houses were built for people to live, play music--and dance. I particularly like the Irish shamrocks on the fellow's trousers and the Quebecois fleur-de-lys on her blouse. At one time Irish and Quebecois were the predominant ethnic mix of Pointe St. Charles. 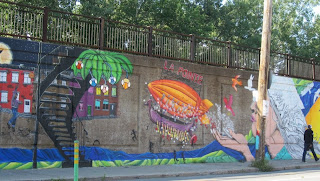 These spiral wrought-iron staircases are famous throughout Montreal--if not so common in the Pointe. I like how the steps have been painted. I have no idea what the orange dirigible, boat and oars are about. 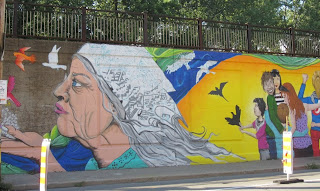 They're being blown by a woman with white hair and kerchief partly made... of cinder blocks? And a pretty turquoise collar. Who doesn't like turquoise? 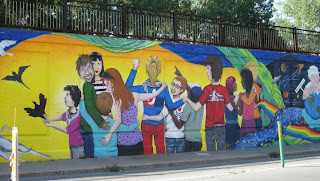 We have a healthy representation of younger and older ages of all nationalities and hairstyles in the mural. I'm all for mixing.

Is that le Petit Prince holding the globe? His sign says nous sommes ici. We are here. There's print in his hair. The community garden is important in the neighbourhood, as are the markets held on certain Saturdays. 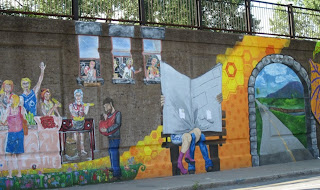 One of the first sections to be painted was this couple entranced with each other and their reading, which made me happy.
On the right, you'll notice the tunnel under the train track, which would make getting around the Pointe easier. Off in the distance, you can see the mountain which identifies Montreal. 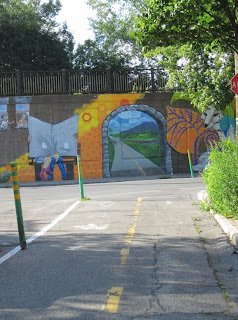 I like how the trompe l'oeil lines up with the bike path.

The mural isn't visible to passengers on the train who can only see the unkempt backyards. But those of us who live in the Pointe can see it very well--that panoply of colours!