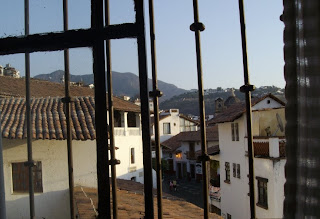 The teacher began by saying that she was our jefe--our chief. We were to listen and follow her like Jesus Christ. She swept her hand behind her hips in case we didn't understand.

Okay, she was joking. Maybe. Her tone was a little too weary. Heavy on the subtext. She knew everything and we knew nothing.

I'd enrolled in a Spanish course because I thought it would be fun. Maybe R and I will go to Mexico again one day and I won't have to use body language to convince the fruit seller that yes, indeed, this white girl wants chili on her chopped watermelon. Pointing at the chili that he's warning me is picante and bobbing my head. If I spoke a bit of Spanish I could ask for two tickets to get on the subway instead of having to hold up my fingers and not understanding how two digits equal ten tickets and no change.

I haven't sat in a classroom for many years. Last time I did, I was an A student. I don't believe I've turned stupid in the meantime, but boy, oh boy, I wasn't following what that teacher was saying. I felt I wanted--needed--a few explanations. My brain doesn't learn language by mouthing sounds without knowing what the sounds mean. The teacher, however, hadn't allotted time for explanations. Or perhaps explanations didn't belong to her pedagogical method. We hadn't yet learned more than a few words of Spanish but we were supposed to... generate understanding ourselves?

The teacher flapped her hand in the air. Just listen and repeat. Eventually our mouths would be able to produce those sounds in given situations that might be appropriate. For example, a stranger accosts you. You say, "Como se escribe tu apellido?" because that's what you've been taught to parrot when you meet someone new. But this new person might be a policeman not interested in spelling his family name for you.

I'm more interested in the component parts of a sentence than learning how to repeat a whole sentence by rote. If I know what the individual words mean, then I'll be able to make new sentences on my own--which I would prefer to predigested ones. (And I'm not just arguing for the sake of arguing. Anyone who speaks French already can figure out how that question about spelling your name breaks down into parts. But I'm assuming that more complicated sentences were going to come.)

In defense of the teacher's method, there were some students who seemed to understand immediately. She would ask, De acuerto? And they would chirrup, Si! Si! Though maybe they already spoke a bit of Spanish.

When we learned the alfabeto, she said that C was pronounced "ce" like the English word sea. Later she asked us our names and gave us the Spanish equivalents, which she wrote on the board. Mine was Alicia, which she pronounced as Alithia. Hold it, I put up my hand. Hadn't she just told us that C is "ce"? Why was she saying Alithia? She rolled her eyes and told me that I was being complicated. But no, I said. Either you're telling us it's "ce" or it's "th".

Of course, I know that Spanish from Spain doesn't sound the same as Spanish from Central or South America. I've watched enough movies. Films from Spain are soft with th's. I wanted the teacher to say this. I also wanted her to be consistent. However Spanish is spoken elsewhere, within the walls of this classroom could we decide to pronounce C as "ce" or "th"?

She shook her head. She was leaving it up to us how we wanted to pronounce our C's. Consistency in the classroom was not a priority.

Next milestone was the letter V, which is pronounced "v" in some countries and "b" in others. So, fine, I get it. As above.

But: people who speak English don't (as a rule) mix their Texan twang with Newfoundland idiom. So... could the teacher please tell us how pronouncing C as "th" or "ce" aligned with pronouncing V as "b" or "v"? So that, when I open my mouth on some future trip to Mexico, I won't sound schizophrenic?

I don't think the teacher appreciated my presence in the class. She wanted us to speak up, but not the way I was speaking up.

We finished with the alfabeto and learning how to spell our names in Spanish. Or if not finished, we let it drop.

Next she asked us about our origen, which is pronounced orihen. After the teacher had pointed at several people who all said they were from Montreal, I put up my hand and asked if origen referred to where we lived now or where we hailed from. The teacher rolled her eyes and muttered something about this being a beginners' Spanish class, not semantica. She pointed at another student who claimed that he, too, had originated in Montreal. Except for three or four students, the whole class came from Montreal! That's statistically amazing, especially given the various hues of skin.

I learned some Spanish, yes. But I left the class with a headache and no desire to return. There are many institutions of learning in Montreal. Four universities and several colleges. Language schools too. I'll find another Spanish course. I expect the teacher won't miss me.