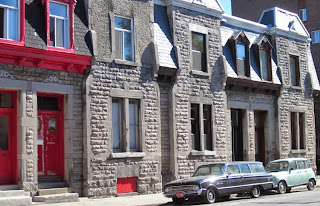 Despite gentrification, Pointe St. Charles still has some backwater stretches--but not this far back. What you see here are "vintage cars" parked for the making of a movie. We came home from a week away to a piece of paper shoved through the mail slot of our door (the original door from when the house was built in 1902--more vintage than those 1960s cars), informing us about the shooting of a movie in which a motorcycle "drives in a loop on the streets". That's as much of the plot as has been volunteered, but I hope there's more. Driving why? Chasing someone? Two guys looking for a lost family member in a dilapidated part of town? Since this morning people with walkie-talkies have been patrolling the street. It's 2 pm now and the motorcycle has just started doing its loops. The truck with the film crew have to drive as fast as the motorcycle to keep up with it. I know that makes sense but it's still funny to see it. Serious tailgating.

Also came home to the news that a story I wrote won the Best Short Fiction Prize for Prairie Fire in the 2013 Manitoba Magazine Awards. Congratulations to Prairie Fire which won four awards. Very happy for myself.

If you wanted, you could buy the mag and read the story: http://www.prairiefire.ca/issue/writing-contest-winners/ I don't get any money for this, but it helps all writers and small literary magazines when you support great venues for good writing.

Or you could go to a movie where a motorcycle drives in a loop on the streets.