the sea calls in september

Since we first started coming to this stretch of coastline—before R bought Madonne’s old house and we were still renting a cabin—we used to walk along the beach and wonder about this abandoned bus. It sits at the bottom of a cliff. 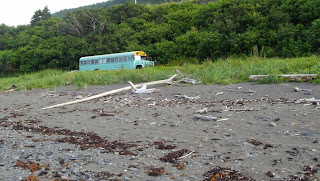 We saw it for a few years running when we noticed that someone had put up curtains and blinds. Sometimes there's a kayak in the grass. Last fall we snuck up to look in the windows, expecting a primitive kitchen, maybe a camping cot—and were surprised to see a front-loading washing machine. This past week, we saw that a gas barbecue and a television had been added. R wanted to figure out how the electrical appliances were powered—from the bus engine? with a generator?—but I thought we’d done enough spying just by looking in the windows. 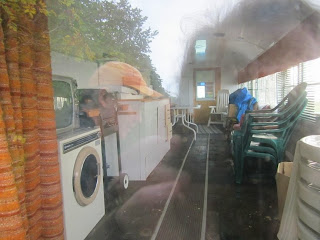 Usually I come to the sea to look at the sea. Water out to the horizon. Sky.
But this time I kept my eyes on the hills where the poplar and birch were starting to change colour. Sept 21, the hills looked like this: 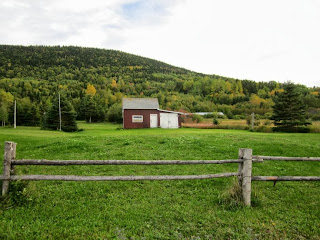 For the next three days, it rained—but not in the way it rains inland. The way it rains by the sea. Wet blew, drizzled, dripped, misted, drummed on the roof.
We still went for walks because that's just something we do. The paths had turned into streams. 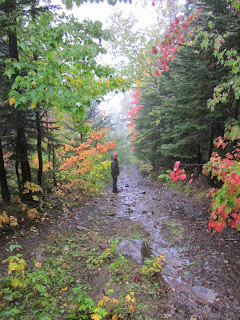 Pretty, but wet.
I got fed up. I was wet down the neck of my NOT-rain-proof jacket, wet up the sleeves as far as my elbows, boots sodden, socks squelching.
I'd thought a skirt and tights wouldn't get as wet as trousers. Ha. Ha. Ha. 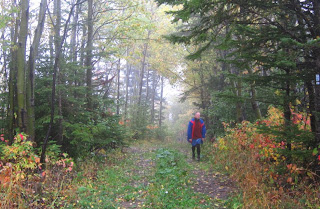 We spent a lot of time by the fire. It’s a slow-combustion stove, but the general workings of a fire and how to tend it are the same since forever. Do you recall nineteenth-century novels where characters are always raking up the coals? I learned about raking up coals. You waste a lot of heat if you don’t know when and how to aerate. Granted, it’s not something one needs to know how to do in a world of furnaces and stoves. Nowadays, a wood-burning stove is a luxury—and I feel duly pampered when I’m sitting next to it with a book, writing, some yarn, a mug of tea.

The sky eventually lifted and lo, the leaves had turned while they were hidden. 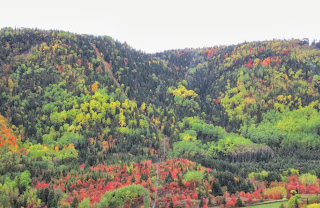 I could go rock clambering along the shore, which satisfies my yen for the sea and my inner mountain goat. 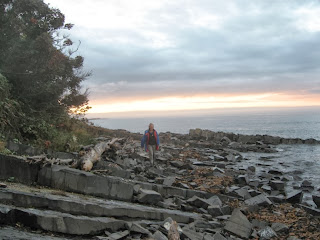 We had two days of brilliant sunshine and went for drier walks up into the hills. Ate cod that we bought at the fishery where you can watch the women cleaning fish through the porthole window behind the cash. Drank wine. Picked plums, which don't normally grow in the Gaspé but our next-door neighbour is a gardener par excellence. 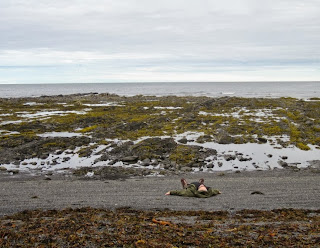