police on the phone

I came home this afternoon to a message on the answering machine from the police. They were doing an enquête. How bizarre.
But even more bizarre their question: what did the middle initial on my Ontario driver's license stand for?
I moved away from Ontario in 1986. I haven't driven since then. The world should be thankful. I was a reckless driver. Kept forgetting that I was supposed to be in control of the vehicle. Too short to keep my eye on both the road and the speedometer.
But what's this assumption that I used an initial on my Ontario driver's license that I'd never used previously and haven't used since--that can't be found elsewhere in my documentation? For example, my birth certificate.
I mean... if the police are calling me to track down the name that belonged to my middle initial back when I had an Ontario driver's licence, they presumably have access to the rest of my paper trail. It's the only initial I use--when I use an initial.
The police did explain why they were doing their investigation. A couple of months ago I volunteered to work with children within a certain organization, which I cannot name; nor can I write about what I'm going to do there. At the time I agreed to a police check. They seem to be getting around to it. So that's good. People can't simply walk in off the street and infiltrate innocent minds.
I'm looking forward to it. If somewhat taken aback at how thorough the police check is. Or perhaps that's a sign of how insignificant I am... that they had to go looking for evidence that I exist as far back as 1985. 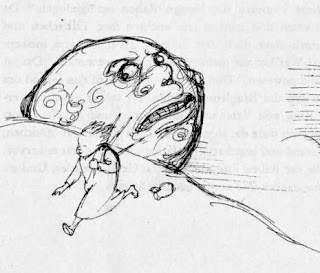 This is an illustration from my old Grimms' fairy tales. Thank you, Fritz Fischer.
Posted by Alice at 8:50 PM