By an emperor's mess, I'm not referring to politics or history--a Kaiser is an emperor--but an Austrian dish called Kaiserschmarrn. It looks like scrambled eggs except that it's made with pancake batter.

I grew up knowing that if you wanted pancakes, but didn't feel like standing at the stove and flipping them, you could dump the whole bowl of batter in the pan, let the bottom brown, and then scramble the mess, turning the bits and pieces until they were browned. It makes for a chunky mess but it's faster than making pancakes and it tastes the same. It's served with jam, compote or sprinkled sugar.

It's called Kaiserschmarrn because it was a favoured dish of Kaiser Franz Joseph I (1830 - 1916). He wasn't the Austro-Hungarian emperor whose assassination led to WWI, but close. He helped botch relations with Serbia and it was a Serbian nationalist who assassinated the Austro-Hungarian heir presumptive, which, if you follow the thread, led to WWI. That's a loose interpretation. I'm talking pancakes here. Whatever else History wants to remember Franz Joseph I for, he was also fond of these messed-up pancakes.

Schmarrn might mean folly or nonsense. Or it relates to the simple messed-up pancakes peasants in 800 B.C. made with hand-milled flour, eggs and rendered fat, and called schmer.

Amazing how linguists earn a livelihood discussing the possible etymology of a word--and what people ate so long ago. I'll have to remember to become a linguist in my next life. I'm getting ready by learning how to say "pen" in four languages. Pen, stylo, kugelschreiber, boligrafo. One of the rare words that's the same gender in all the languages that (so perversely) assign gender to inanimate nouns.

A few weeks ago, when R and I were in the Gaspé, we found a plum tree laden with plums. This is unusual because it used to be believed that the summer on the coast was so short, there was no point in growing anything as delicate as raspberries. Forget fruit trees. However, our neighbours are devoted gardeners who plant all kinds of vegetables and fruit in strategic locations where the plants and trees get a maximum of sunlight and a minimum of exposure. Their's was the plum tree, but they had already boarded up their house and left the coast to return to their winter home. R and I grabbed bags and picked the plums. I cooked some of them down to a thick compote--and remembered Kaiserschmarrn.

I didn't have a recipe--and no access to internet--but it's pancake batter, right? As with pancake batter, there are simpler and fancier versions. You can use cream instead of milk. You can brown them in butter or in oil. You can separate the eggs, beat the whites and fold them into the batter.

I decided to do the egg white thing because it gave me a chance to use the vintage eggbeater a friend had bought for me at a flea market a few years ago when I didn't have $3 in my pocket and he did. Since we have no mixer in our house out in the Gaspé, I brought the eggbeater--in case I ever want to... make piles of whipped cream? 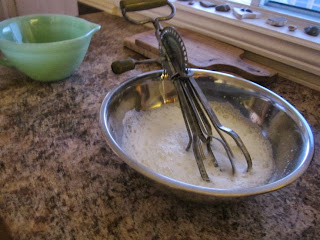 I took a picture of the Kaiserschmarrn too, but it looks so messy--and perhaps unappetizing unless you've smelled it cooking--that you'll just have to take my word for it: it's a great way to make pancakes all at one go. Try it. Just keep turning all the pieces till they're all cooked through. Serve with peach jam, plum compote, maple syrup...

Okay, fine, here's a picture I took off the internet. 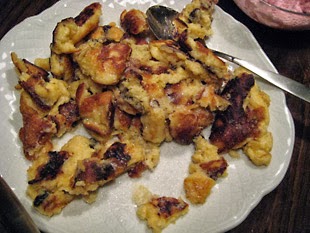