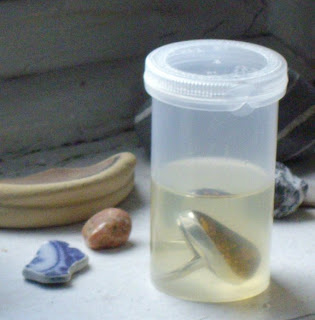 When I was growing up and hung out in forests in southern Ontario, I sometimes saw resin dribbled down the bark of pine trees. The resin was clear and yellow and sticky. It stayed clear and yellow and sticky even when it rained.
I don't know what happens in the stage between resin becoming amber so that you can't get amber wet. I bought myself a beautiful amber ring a week ago. I wore it one evening and the next day noticed that the amber looked smudged. I tried to clean it but nothing worked. I finally looked on the Net and found innumerable smart-ass sources warning me not to get amber wet. Amber + water = turbid. Maybe the jeweller could have let me know. I hadn't done the dishes or anything like that. I'd just... washed my hands at some point.
How could I restore it? Searches revealed ever more warnings about getting amber wet. Thanks. Also lots of self-help medical sites on what it means if your urine is cloudy amber in colour. I had to read through a few sites on the properties of amber before I found a line suggesting that an oil bath would help. "The oil fills the numerous pores to which the turbidity is due." (Cf Wikipedia.)
I've had my ring soaking in almond oil for 4 days now. It doesn't look 100% new, but almost all the cloudiness is gone. I'm posting this so that the next person who wants to undo the damage of amber + water might not have to look so long. I used almond oil because sites on cleaning amber--without water--suggested almond oil.
Posted by Alice at 11:03 PM 75 comments: 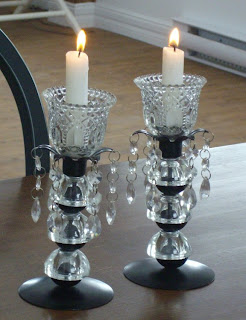 We found these chandelier candleholders in Madonne’s kitchen cupboards. When she moved away, she took only her clothes. She left the sofa with a dog-chewed armrest. The iron bedstead, sheets and blankets still on the mattress. A frilled satin pillow. Beer glasses from the 1976 Olympics. Dog bowls by the kitchen door.
On Sunday we drove 12 hrs to get to Madonne’s house—which now belongs to R. No telephone, no internet, no TV, no radio. I brought a Canadian Tire camping chair to sit in. On Monday, with the snow streaking by outside, our closest contact with humanity was the snow plough that roared down the highway every hr or so. On the side of the house that faced the wind, halfway up the window—a metre off the ground—was covered with snow. The house was turning into an igloo. In the Gaspé snow rules. The wind takes a bead on the horizon and tears along with manic dervish whips. Snow upon snow upon snow. Desolate whiteness. I could just make out the fir trees that marked the edge of the neighbour’s lot. I couldn’t see the ridge of hills behind the house. Despite the wind, I felt brave and strapped on my new snowshoes. Floundered through the powdery snow around the house. At the back, the snow had drifted so high that my knees were level with the shed roof. By the time I got back to the front of the house, my steps from the door were swept smooth, any mark of my passing effaced by the Maritime wind.
I thought it would be good to come to the Gaspé after Mexico City. Absolute quiet after the non-stop cacophony of people, traffic, music, and noise. Our lungs would need a boost of fresh air after the mega-city smog. Mind you, I wasn’t thinking HOWLING fresh air stinging with ice and snow. Silly me. There’s a reason why Madonne wanted to escape. Why so many of the old houses along the coast are abandoned. Windows boarded up.
The Gaspé—la Gaspésie—is the easternmost region of Quebec. A peninsula that sticks like a fat hitchhiker’s thumb into the Gulf of St. Lawrence. The St. Lawrence River is so wide here that it's not a river anymore. You can’t see the coast on the other side. The water is saline. I’ve seen whales from Madonne’s kitchen window. Here, too, you can hike to the very end of the Appalachian Trail that goes from Georgia to Maine, then crosses the border into Quebec, the last suggestion of once-upon-a-time peaks heading out to the tip of the Gaspé peninsula.
We spent all of Easter weekend last year dumping out Madonne’s house. Again at Thanksgiving. Rock star posters, pink china puppies, religious kitsch. Why did she accumulate so much junk only finally to leave it behind?
I thought I’d already emptied the kitchen cupboards of all but the plates, bowls, and cutlery which we can still use, but I’m still finding things. A dozen barbecue forks. These chandelier candleholders.
We’ll keep the candleholders. They’re perfect cottage aesthetic. Slowly the house is beginning to feel like ours.
The trip back to Montreal today took only 8 hrs. The roads were dry. The CBC and Radio Canada telling the horrible story of the catastrophe in Japan.

sparkle spray paint shrines on the way to taxco