I'm screwing around with the calendar here. I know the full moon is tomorrow, but tonight's almost-fat moon is very close and I was walking home from the subway with a knapsack stuffed with harvest. Not the usual harvest pickings you'd expect in a northeasterly city in North America--no corn or pumpkins or squash (though I had an excellent roasted squash and kale salad for supper, and if I recall correctly, there was a pumpkin on the table).
My friend sent me home with a Nuremberger Lebkuchen tin full of fresh figs from the two trees in her backyard. Also, the now ripe eggplant planted for me. These aren't fruit and veg that one could previously grow in Montreal--and they don't grow now because of warmer temps and climate change. They grow because my friend lives in a neighbourhood of clever Italians and Greeks. These fig trees are a couple of decades old, if not older. There's a whole procedure of burying them to survive the winter. You dig a trench, uproot the tree and tip it. I've never seen it done and can't describe it in detail.
I used to have a Greek landlord who successfully grew lemons. In Montreal? Yup, in Montreal.
The only footnote I'll add is that if you plant an eggplant next to a fig tree, it won't grow up shaped like an eggplant. It will think it's a fig. Plant psychology. Peer group pressure. 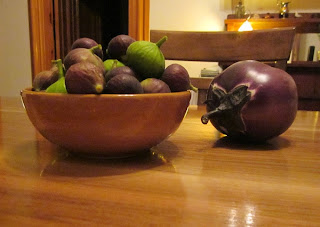