creeks i have known

Do you know the expression "up shit creek without a paddle"? The word is creek, not river or stream, because a creek has that low-lying, sluggish feel. Torpid, especially in the summer. Silty brown.

I grew up in southern Ontario amid fields on the Niagara Escarpment. In that part of the world a creek is called a crick. Not much going on at the crick. You could watch minnows hanging in the water. A crayfish scuttling out from under a rock. Not as often, but sometimes, the glide of a larger fish.
Here's a picture of me at Twenty-Mile Creek. I was given a bundle of branches to look more picturesque than, I suppose, I was all by myself. 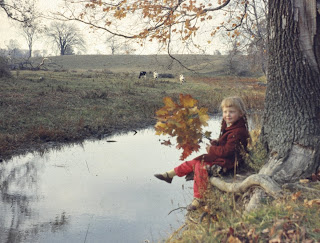 I learned how to skate on this crick. Crick skating isn't like skating on a river or a lake because the water might be so low when it freezes that the ice is textured with dried grass, twigs, even rotting logs. You skate knowing that the ice might trip you any moment. That's where I developed my Frankenstein style of staying upright, arms out to brace me if I fell--which is how I still skate even on a city rink.

My parents moved and my next crick was Spencer Creek. That was where I learned how to swim. My father threw me in the water. He believed that if I had to, I would figure out how to paddle. He knew it wasn't dangerous since all I had to do was stand up. The water didn't even reach my chest. Silly me, I spluttered and thrashed until he hauled me out. I did learn how to swim that same summer--not by being thrown in.
What I recall about that crick is the marsh grass that grew high over the water so that you kayaked as if through a tunnel. The slide of the kayak against the stiff grass. The turtles sunning on dead trees half-sunk in the crick, pretending you couldn't see them until one lost its nerve and plopped off with a flat splash, and then they all plopped. One by one by one by one. I remember lying on the bridge and watching the brown shadows in the water for movement.

Here's a picture at the beginning of the summer before the grass got high and engulfed the water. It's not an interesting picture--but what do you expect? It's a crick. Nothing happens at the crick. 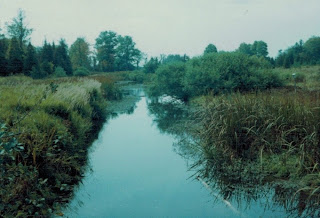 I swam in the crick to cool off in the summer but did my best never to stand in it for an instant longer than it took to scramble out. The bottom was mossy and slimy, and there were bloodsuckers. Bloodsuckers flatten skintight on your flesh. You can scratch and poke and screech all you want. A bloodsucker stays stuck onto you until it's sucked its fill of blood and it decides to drop off. If you're a kid with an active imagination, that particular scenario might just make you neurotic for the rest of your life. I don't know who finally enlightened us about bloodsuckers and salt. Sprinkle them with salt and they squirm off right away--not fast enough for me.
No one in our family fished, but I had a boyfriend at some point who persisted in standing by the crick with a fishing pole. He caught a few bass which were so small and bony that even he gave up.

The water level in Spencer Creek rose in the fall, flooding the surrounding marshland so that in the winter we had acres' worth of skating, if we didn't mind the tufts of dried grass, crusted snow, air bubbles the size of plates, sometimes breaking through. 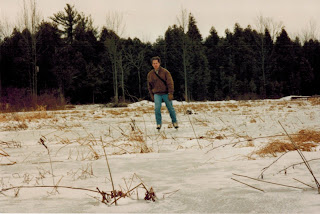