Last week R rented a bazoo and we drove to Ontario where I have family.

I was born in Hamilton. When I was a child, my parents moved to the country. In my private lexicon, the property where we lived is called The Swamp. I believe the correct environmental term is Wetlands, but I am neither a heron nor a mosquito. To me, Wetlands = Swamp. My parents, who took nature photography, and my siblings, who liked to play outside and climb trees, loved it. I didn't. As soon as I possibly could, I left and moved to the city. First Hamilton then Toronto. In 1986 I moved to Montreal.

Since I don't see family often, going back always brings a small--sometimes lesser, sometimes greater--jolt to my sense of who I am. They believe things about me which I feel I've outgrown or that no longer apply. Or that were a misconception from the start. Of course, they think I am who they think I am--until I show up and act like an aberration, disturbing misconceptions which have become so firmly entrenched with the years that they've become truth. What is Alice doing? Boy, has she gotten weird, living in Montreal. To be fair, I probably do the same with them.

The same phenomenon can happen with friends you haven't seen for a long time. You, for example, remember the purple tent dress a friend wore for a whole summer (because she was mourning an ex-boyfriend who'd made a specific comment about the dress, but you don't know that. You only remember the purple dress.) Now, all these years later, when the two of you are supposed to get together over lunch and she walks into the restaurant in a smart suit, you might be so startled that you remind her of the purple tent dress. She won't find the memory cute. She especially won't like that, for all the years since you've last seen each other, you thought she never got past the purple tent dress.

This kind of thing can happen with family members who don't see each other often. With families, it's potentially more problematic because they know you from childhood. Older siblings can even remember when you were born and drove the family crazy with colic. Three months of constant wailing? How can anyone forget that? Not that anyone ever says, "You had colic and drove us all crazy, and every time you say something that bugs me, I'm remembering how you had colic!" But the memory is there. Always there.

This past visit with my family was fine. I'm thinking along these lines because of a disturbing vision I had while on the road going there. We'd left Montreal at 6:30 pm, since R refuses to drive past Toronto any earlier than 12:30 am which is the only time traffic on the DVP moves. I was feeling mind-bent and weary after 6 hours in the car, and was mightily confused by the many signs I kept seeing for SELF STORAGE. 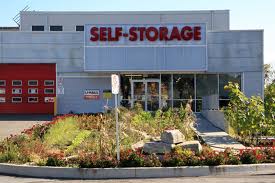 Self storage means storing yourself, as in storing your own person--as in buying a coffin.
Or visiting with family, since that's what families do: remember who you were once upon a time, and depending how tenacious/affectionate/aggravating/good-hearted/resentful/indifferent they are, trying to keep that version alive.
Posted by Alice at 8:15 AM