choking in public during a pandemic

Yes, that was me walking up a hill, chatting on the phone, took a big breath, and in flew an insect. Had it gone down my throat, I would have swallowed it, but it went down what I as a child called my other throat. En route to my lungs, not my stomach. I excused myself on the phone, said I had to cough, held the phone away.

But there was no hiding that I had to cough and cough and COUGH. I gasped that I would call back. I needed to find water to drink.

Not easy to find water with stores, restaurants, cafés, water coolers, public washrooms closed, but I was lucky because there was a pharmacy a few doors away. I could not stop coughing, but I managed to get my mask hooked over my ears which is always tricky since I wear glasses.

I stepped inside and the woman who was screening clients looked alarmed and waved for me to leave. Over my gasping and coughing I managed to shriek that I wasn't coughing, I had swallowed an insect and needed something to drink. She informed me that they did not hand out glasses of water, I would have to buy what I wanted. Yes! I coughed. Yes! Let me buy water! 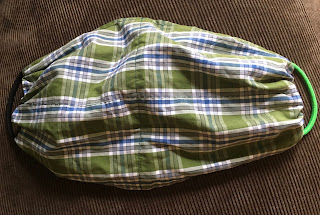 I had my elbow clamped over my mask, trying to keep my lungs in my chest. I have a very aggressive rejection-of-insects mechanism. (I know this from when I breathe in insects while I'm cycling.) My face--what you could see over the mask--was red. Guaranteed. I had projectile splashes of tears on my glasses. She reminded me to use the hand-sanitizer to my right and observe 2 metres social distancing.


I grabbed a bottle and sputter-coughed my way to the cash, both elbows over my mask. The woman paying for an item wheeled around, eyes horrified over her mask. Over my coughing I tried to explain that I'd swallowed an insect. Oh! I should drink something, she said as she hurried away.

When I told R the story in the evening, he asked why I didn't just open the bottle and drink. Why didn't I?

The cashier wore a mask, face shield, and gloves, and was behind a protective barrier. A man in his 40s. He stepped away from his cash, unsure how close he wanted to be to me. Again, I gasped that I'd swallowed an insect. I wasn't coughing, I was choking.

The whole while that this was happening, I was thinking that if I were faced with someone coughing as badly as I was, I would probably have kept my distance too. These are times when you just don't want to hear coughing.

Except now I was choking. I could feel more than my lungs heaving. I might even throw up. I couldn't wait for the cashier to overcome his qualms, however reasonable. I staggered from the store, ripped off my mask, and drank. I felt and looked like I'd been half-strangled. Face purple, tears streaming, breath wavery. I'd hidden inside a recessed doorway beside the pharmacy. I was trying to calm down. Breathe normally again.

From the angle where I stood, I saw the cashier step out of the pharmacy, still wearing mask, gloves, and face shield. He looked up the street and down the street. Where was that crazy woman who had run off with a bottle of water and her unlikely excuse about having swallowed an insect? Hands on his hips. The posture equivalent of a what-is-this-world-coming-to tut. I wondered that he was so earnest about his duties over a possible loss of 99 cents.

I decided to let him stew for a few more moments in indignation. I waited till he'd given up scanning the street and put on my mask again. The woman who was screening people recognized me--or the empty bottle I held up. Oh yeah, she said, he wondered where you went.

I returned to the cash. Here I am, I said. Do you want me to pay?