The end of May, late morning, cloudless sky, fruit trees in bloom, the water in the canal deep blue. From somewhere a skunky whiff that reminded me of my brother pushing a wheelbarrow of sheep manure into the woods, and our mother being glad that he and his friends were doing something healthy and going hiking. Ever since then I've believed that dope grown with manure has a more pungent aroma.

R and I were cycling along the canal, heading toward the path that crossed to the river. He had slowed, and I was too close--really too close. Something was about to happen and I knew it was my fault, which didn't mean that I knew how or the right way to stop it.

As a footnote, let me say that I do not have a driver's license. Once upon a time I did, but I let it lapse for the good of humanity. I was the kind of driver who would have clipped a kid, who ran after a ball into the street, without even feeling the bump or seeing the flash of movement. Hey, at least I recognize that about myself. More people, who are currently in control of an engine-powered box of metal and glass, could stand to ask themselves whether they should be driving.
Some years ago I was informed that I'm no longer allowed to have a license. I had a small stroke that left me one-quarter blank in my field of vision. Imagine your face in a mirror. Divide the mirror into four equal parts. The top right square is blank. It's not blurred; it's not grey. It's just not there. You look into a mirror and don't see one eye and half your forehead and hair. Look out at the world and you don't know what you're not seeing. The deficiency is called quadrantanopia.

But I can't blame what happened on the bike this morning on my compromised eyesight. I was too close to R's bike and about to nick his back tire.
In hindsight, I realize it wouldn't have mattered to R. He's a seasoned cyclist. A few years ago he cycled from Montreal to Toronto. From May to October he cycles to where he works at the top of the mountain. It's a climb. We live at the lower end of the city. To get to where he works is a climb of over 200 m or 700 ft.
In Montreal we call this the mountain, though it isn't really one. My Austrian genes insist I make the point. After all, my father and his father were born in this house. Those are mountains--and even those aren't the high Alps. 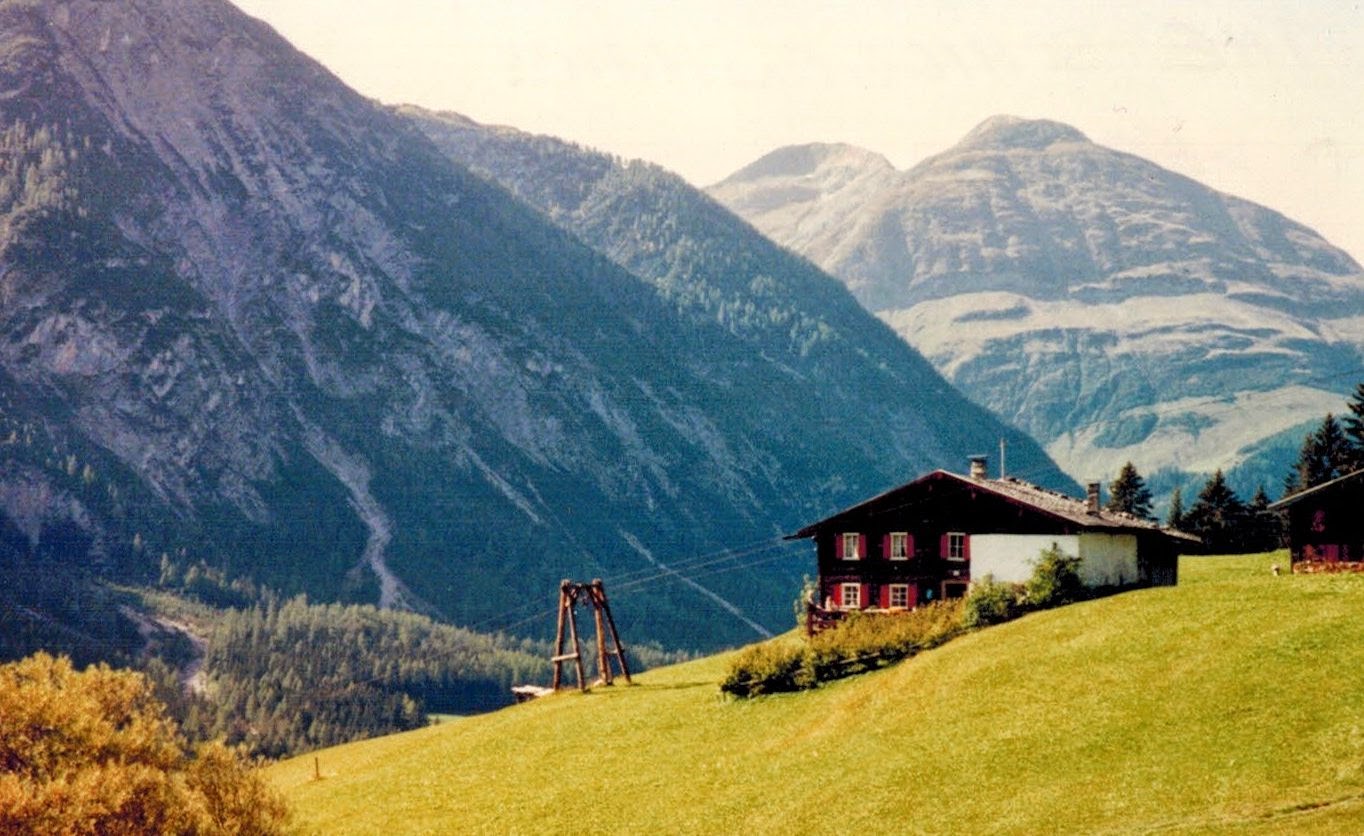 But I live in Montreal now, and up on the mountain is where R works--in the cemetery. Have you ever noticed how societies before our heathen times gave the best real estate to the dead?
R's place of employment is the largest cemetery in Canada and the third largest in North America. You can get lost among the statuary, columbaria, gigantic trees, In Memoriams, gravestones, charnel houses, mausoleums, plinths... R's job has introduced me to a whole new branch of vocabulary.

And stories. Fights over estates, biker burials, family indifference, family tears, balding brothers still jostling for daddy's (dead) attention.
When we were cycling today, he told me about a man who came to the cemetery office because his girlfriend of decades had just been interred in her father's plot, and her father had informed the boyfriend he would not be buried there. The boyfriend might live another 50 yrs. He might meet a new girlfriend. Any number of eventualities might play themselves out.
However, at that moment, he wept with a full grieving heart at the prospect of his ashes not being allowed to rest with his girlfriend's in her father's plot.

But R hadn't told me that cemetery story yet. We were cycling and I saw I was just about to knock my tire against his, which is very bad manners when cycling. I should have braked, but I'm not yet used to my new bike which actually has working brakes.
On my last bike the brake pads kept sticking to the tires. When that happened, I had to bend forward, while cycling, to try to nudge them apart. Since I couldn't manage that with the back wheel, I never used my back brakes. That's probably dangerous, but danger only happens now and then compared to cycling with brake pads sticking all the time. One weighs the irritations and acts accordingly. Or at least I do.
And sure, yeah, I took my bike to be fixed. I spent $100 once and $50 another time. The brake pads still stuck. The bike was a lemon.

Perhaps I should add that I don't as a rule cycle in the street. I'm lucky to live very close to the bike path. I am more of a danger to myself than others.

From my old bike, dysfunctional as it was, I learned not to trust my brakes. Instead, I would coast, drag my feet, sort of hop to a stop. It looked klutzy but it worked.

Now I have a new bike with brakes that work, but my initial reactions haven't adapted yet. So instead of braking when my tire was about to bang into R's, I threw myself to the ground on my almost stopped but still-moving bike.

It could have been messy, but fortunately wasn't. I wasn't cycling fast, my hands and arms hit grass and I hardly scraped myself at all.
I was able to cycle home with only two bruises, one scraped knee, hardly wincing at all. 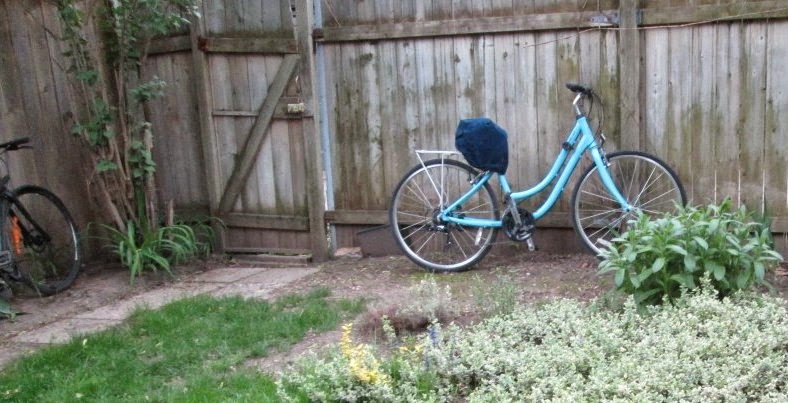 Do you see the blue velvet cover that discourages the vandal squirrels that inhabit our backyard from chewing my bicycle seat? It's an urn bag. 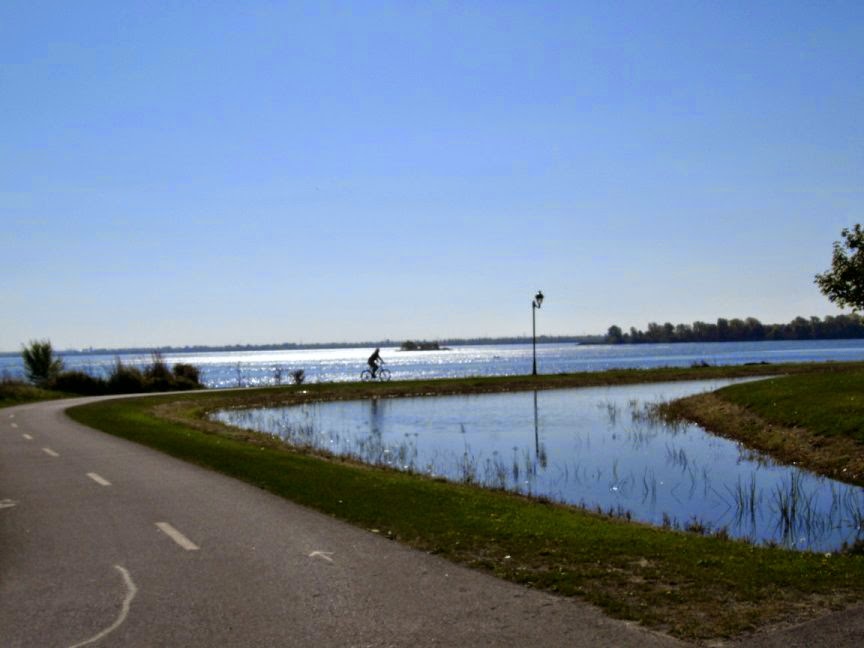