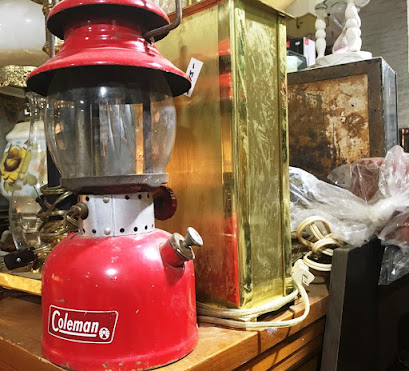 My parents used to have a Coleman lamp like this to light our one-room cabin in the woods. I recall at least once when it burst into flames. Six of us and a burning oil lamp, all in a single room. One parent angled a broom pole through the handle and carried it out the door. It was... exciting? scary?

Not so long ago, when people could still wander about at random, I wandered through an antique/junk store in a warehouse in Griffintown. There was so much of everything that I started taking pics.

Is there someone in the city who might want to buy metal-clad wagon wheels? Presumably. 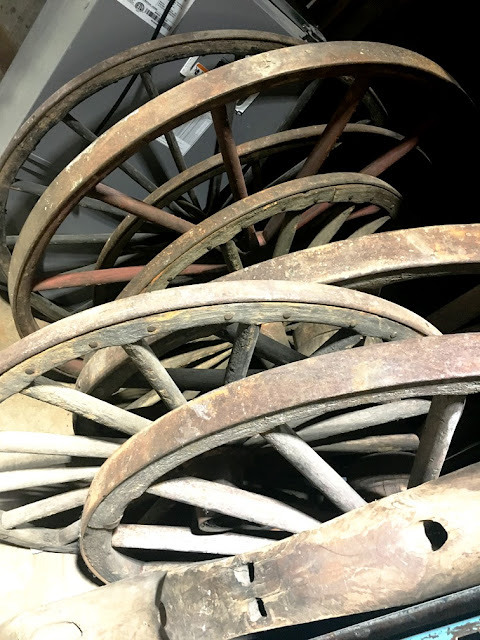 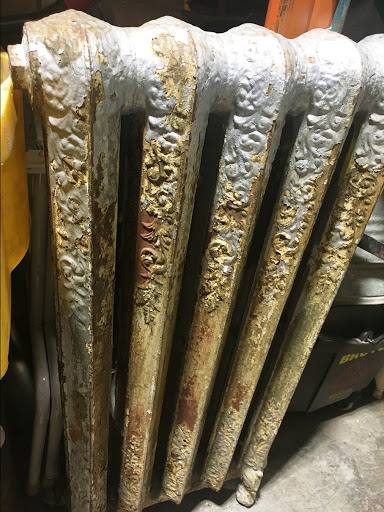 These are the kind of hot water radiators I had in the 80s and 90s. A method of heating, believe it or not. Hot water in cast-iron was expected to keep a room warm when it was -30C. It didn't.

The metal wasn't always embossed with floral motifs, though the rads were  painted--mostly a variation of white or beige so that they weren't as visible against an apartment beige wall.

I remember the clunking sound when they started to warm up--or didn't.

If they didn't, you had to "bleed the rads" by opening the valve and releasing trapped water. Assuming it was water that came out and not hot steam.

There was a lot of hissing, spurts and spitting. Like inviting a dragon to snort. 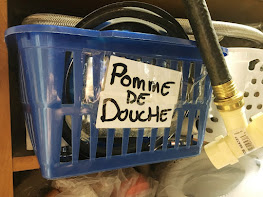 There are several in this basket, so the sign should read pommeS de douche. It means shower head but translates literally as apple of the shower. I didn't know that was what they were called. If I'd ever had a problem with a shower head in a French hotel, I would have said head, not apple. 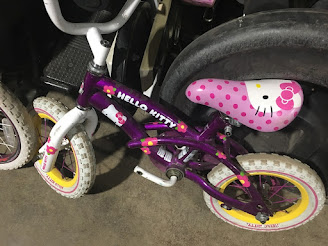 And I have had plumbing problems while staying in hotels. Memorable was the one in Dijon. This happened in the 80s when there were still cheap hotels in France. Cheap meant that the toilet was in the hallway, shared with other guests on the floor. I'm saying 'toilet' and not 'bathroom' because all there was in the hallway cubicle was a toilet. (Except for times when someone left the window open and a pigeon flew in--which happened frequently, especially in bad weather.) To wash your hands, you returned to your room where you had a sink. Sinks in the rooms might sound like a luxury, but that was also how you were supposed to wash. There might not be a shower in the hotel. And even when there was supposed to be one and you paid extra to use it, that didn't mean it was working or that there was hot water. 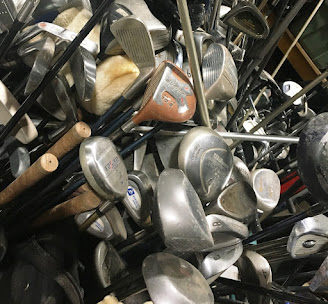 But the problem in Dijon wasn't with the shower. I wanted to use the toilet in the hallway but it had overflowed onto the floor. I had come to Europe from Ontario. I had learned French at school I knew which verbs were conjugated with être. I did not have much plumbing vocabulary.
I told the concierge that there was water in the toilet. But of course! she cried. Mais oui, Madame! Here in France we have water in the toilet. Oh, right, she thought Canadians didn't have plumbing. No, I said, water on the… I thought I said floor, but I said ceiling. Mais non, Madame! There is no water on the ceiling! She had a trumpeting, singsong voice. It took a few more attempts before she understood and her shrill voice rose to a screech for her husband to get the mop. 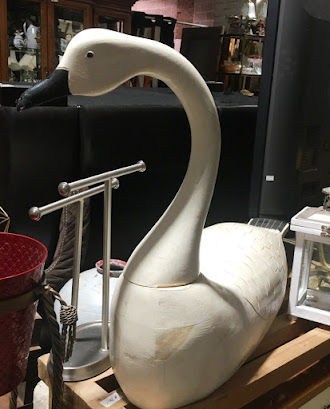 This wooden swan had a surgical intervention done on its neck. I'm not referring to the join that's visible. A bird with a neck of this size would almost certainly be carved in two separate pieces. Otherwise, think of the size of the piece of wood you would need in order to carve a whole swan from tail tip to beak.
If you happen to have a large carved swan at home and cannot see the join, it's because the carpenter used wood glue to conceal the join cleverly. (That's my theory.)
In this case, though, the join is left visible because the swan has had an osteotomy done on its collum in order to implant a pin so that the neck now pivots.
I spent a while experimenting with swan poses to find the one that looked most coy and don't-you-want-to-take-me-home?

Remember volume dials and buttons that you push--push until they click into place? 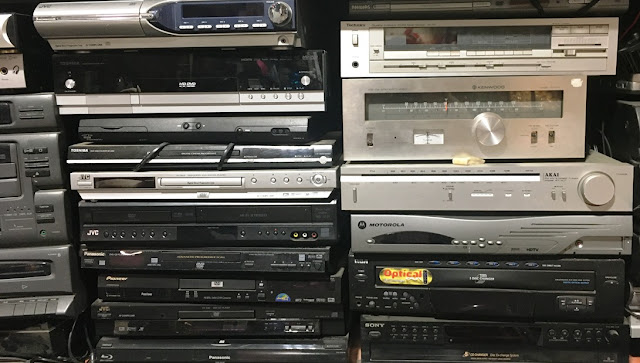 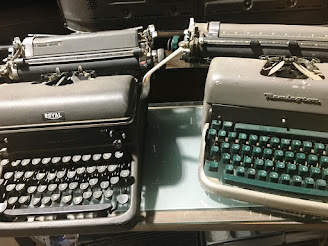 I learned typing from Mr. Jones in Grade Nine at Saltfleet High School in Stoney Creek, Ontario. Mr. Jones would not be impressed by how many mistakes I make now. I would never have become a writer if it had ever depended on my prowess typing. I'm relieved that at least it's easier to correct mistakes on a computer keyboard than it was when I learned on one of these stiff, heavy, disobliging machines that we had to operate with ten fingers. It was a sadist who put "a" in the little finger position.

Are you wondering if there were chairs? 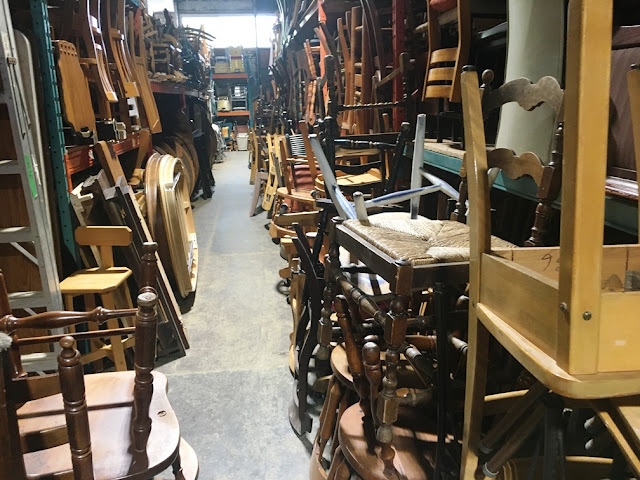 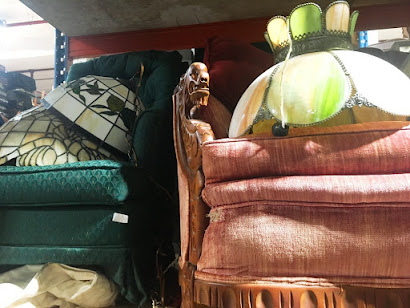 There's such an excess of Stuff in this place that it's hard to focus on anything you might actually want.
The vintage upholstery, the footstools, the damask, the Tiffany lamps with bona fide stained glass--
Wait, wait, wait! Did you see that the armrest on this chair has a carved dragon head? 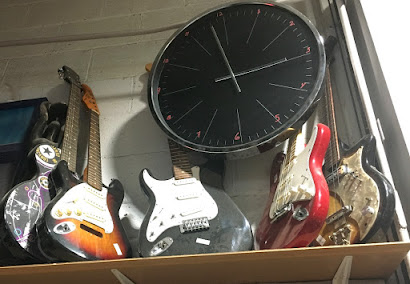 But finally you leave without having bought anything, because there's just TOO MUCH. You're on your way and wondering how much time you've spent walking up and down the crowded aisles on the creaking floors, and you glance up at the clock to see what time it is. And oh, haven't you always secretly wanted to play electric guitar?

Lots of this stuff will have been sold by now, but I'm guessing there will still be a few chairs, lamps, and golf clubs left, so if you want to put on your mask and go, the place is called Arte. http://arte-montreal.com/arte/

I'll bet the swan is gone though. Perfect pet for confinement.