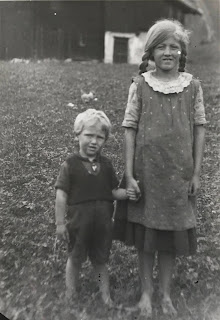 My family name, Zorn, means anger. How people acquire their family name varies with their culture. I come from a feudal European background where the aristocrats took the name of the land they owned, artisans were identified by their trade, and peasants were labelled by a striking personal characteristic. Once upon a time, high up in the Tyrolean Alps, I had a very angry peasant forebear.

This morning I was reading Ali Smith's novel, Spring, and saw the words, "ancient hatreds". She's referring to Britain and Ireland.

I am thinking of the news I heard yesterday that my father's sister passed away. She was 94, had worked for many years as a teacher and then a school principal, was an excellent cook--she taught me how to make various kinds of knödel or dumplings--kept her windows so clean that I once touched the glass in disbelief because I doubted it was there. I have this picture of her at 9 years old with my father. Both are barefoot. She told me once that she thought it hilarious how hikers wore stout boots. She grew up in the mountains and knew that you could feel your way much better in bare feet.

She was pious and upstanding--and sustained by rage. No one could inveigh as she could. She stoked the flames of old grudges again and again. There was a particular family member she didn't want me to visit when I was in Austria, and she would unearth every last prejudice and slight at top volume to prove to me that I shouldn't go, and afterwards, when I had anyhow (because what did her long-ago battles have to do with me?), she would scold me again. 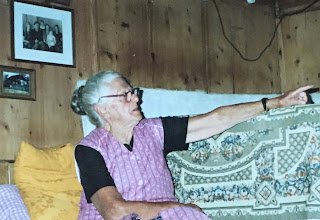 Here is my grandmother (her mother) inveighing. I have cropped her victim. In any case, everyone was her victim at one time or another. She could bear grudges for decades. Once, when R and I were in Austria, he bought a loden jacket in the village. She demanded to know where. Ach! Nein! Not there! Not from that cow! What I gathered from the ire and thunder she called down upon us was that the wife of the shop owner had insulted her when they were children. When R bought the loden jacket, she was in her 80s.

Ancient hatreds, yes. My grandmother wasn't even born a Zorn, but a Wolf. She came by her name too.

I have my own "anger management issues", though I've learned to recognize when they flare up and I nip them while I still can--thanks to twice weekly therapy a few years ago. (Not that I always succeed.)

What is this thing that makes people rage? That they can't resist whipping up? Does it make them feel more alive? Like they're protecting their territory? Do they feel so threatened that they have to make themselves look big?

I'm looking at the world news. Ancient hatreds, yes. Thank you for these words, Ali Smith.

Interesting footnote? When I dictated this into the computer (because I draft longhand), the program kept writing "ancient patriots" instead of "ancient hatreds".

On a sweeter note, since I was looking through old photos from Austria, here's me above the clouds. I am wearing boots. 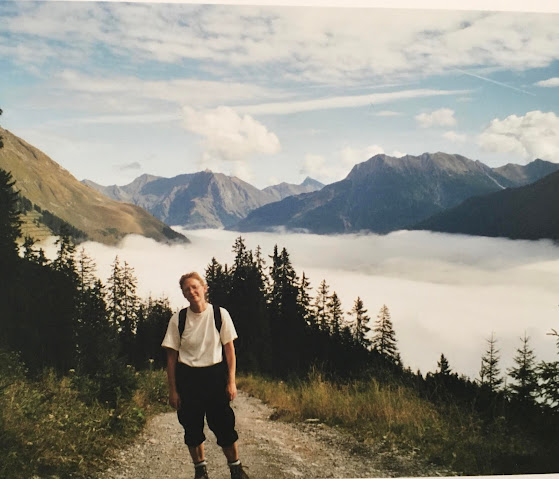