Since I don't konmari my/our living space, I live with what some would call clutter. The clutter might not bring me joy, but I'm not an overly joyful person, so that's okay. I am, however, fond of stories and I keep objects when a glance is enough to remind me of a place, a time, a person. 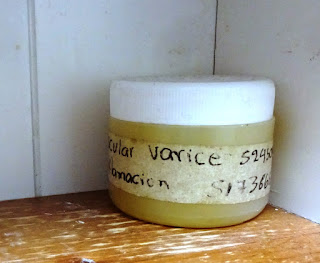 This hand-lettered plastic jar comes from the guide who led us on a hike in the Sierra Norte mountains of Mexico. On our walk, she explained the medicinal properties of the Alpine plants. When R grazed his hand on a rock, she dug into her crocheted bag for this jar of salve she'd made. She said it would disinfect the cut and stop the bleeding. That's not what it says on the jar but R's bleeding stopped, and she was so helpful. She even included her phone number in the event we wanted more. For two years the jar has lived in a corner of the bathroom cabinet. R uses it occasionally when he cuts himself shaving. Or on dry patches of skin. He says it helps. It has a pleasant, healthy-weedy vegetable smell.


Here's the rock where R grazed his hand. A variety of medicinal plants. 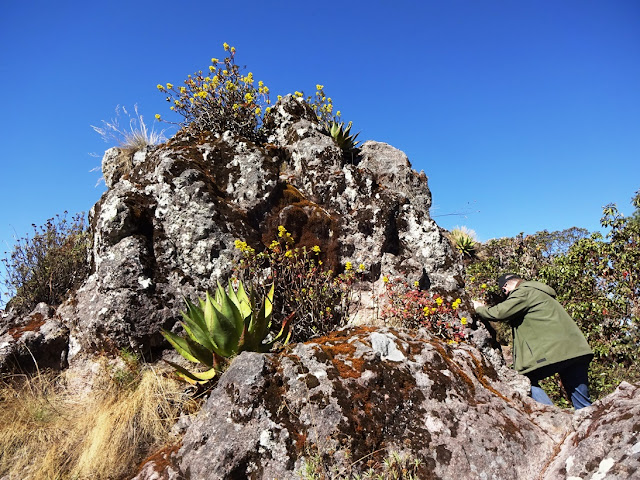 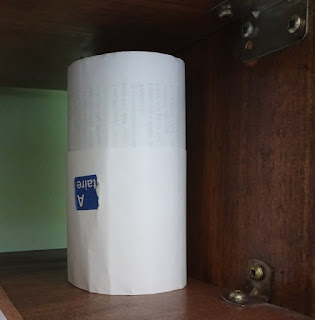 Another corner--a shelf in my office. How long have I had this roll of paper? More than ten years. As long as twenty? Inside the roll is a poem called "Through the Looking Glasses, Markly". It was written for me. Nobody else has ever written a poem for me, so I love it, quite apart from the wisdom and absurdity of the lines. Favourite lines? "Know thy animals as thyself." "Not that I trust anyone who would wear a tuxedo, either." This refers to the magpies that abound in Denmark where the poem was penned. "Some butterflies have a certain dignity in their erratic flight..." "To which I say, I believe that's organic rot, Alice." My friend knows me well enough to call me on my vanities, writerly and otherwise. It's a joke, for example, to say that any lines are favourite because the WHOLE POEM is a favourite. Nobody else has ever written a poem for me. (Have I already said that?) The roll is 26"/66.5 cm long. Paper has been folded and taped together. I don't recall how I received it. Obviously by mail because I have never met this dear friend face to face, but why is there an airmail sticker on it as if the roll arrived like that, intact? And hm, maybe Marie Kondo would argue that I get so much joy out of this poem, that I should keep it--but I AM NOT GOING TO FOLD IT the way she would. It is and will always remain a roll. 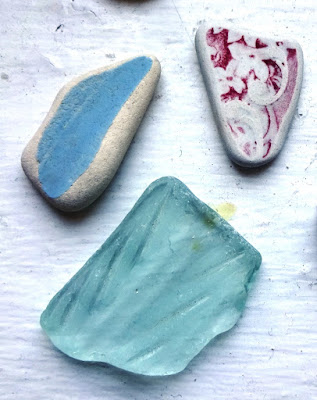 And here, an admittedly dirty window ledge which I'll wash once I have all the windows open again. Scattered across it I have a few pieces of beach glass, as well as what I particularly like to find because they're more rare: pottery that's been washed up on shore. The patterned pink and white piece was found in the Gaspé, on the beach in front of our house. I found the blue piece in either Morocco or Tunisia. Being disorganized about what I find means that I don't always remember--but it doesn't matter because I'm happy remembering either place. (Oh, no, is that more joy?)

Technically I should not have kept the beach glass--also from the Gaspé--because it has not been worn completely smooth by the wash of the waves. But it's turquoise which is a rare colour and I liked the ribbed pattern. So...

I can make my own rules.