Five Roses in Ontario / no appropriation of cuisine 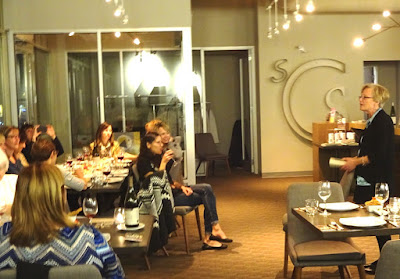 We had fun, Five Roses and I in Ontario. First, gourmet nibbles and wine with enthusiastic book clubbers in Stratford at the Chefs' School 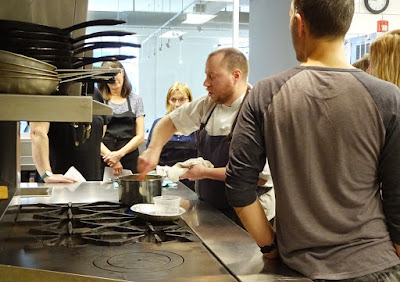 then a pastry chef showing us how to make cream puffs and inviting us to try our hand at piping whipped cream, followed by me talking about the role of food in characterization and fiction. This, too, was with the Stratford Writers' Festival under the auspices of the Chefs' School. Imaginative programming, right? Not your everyday writer's gig! 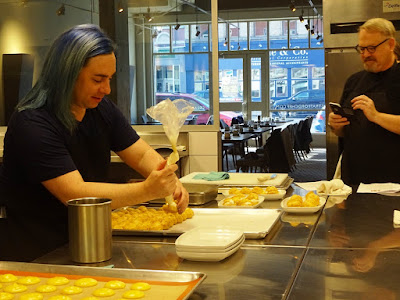 As a footnote--something to consider?--there were more male participants at this pastry/writers' event than I usually see when I speak about a novel. 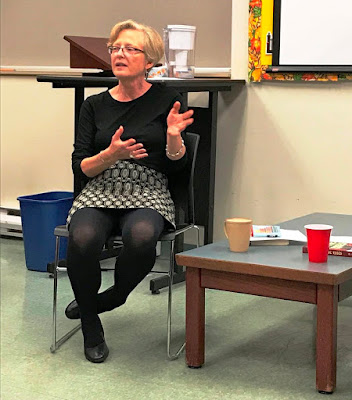 then a most interesting interview at the Westdale Library in Hamilton with Jennifer Gillies, artistic director of gritLit. Perceptive questions and comments from the audience. 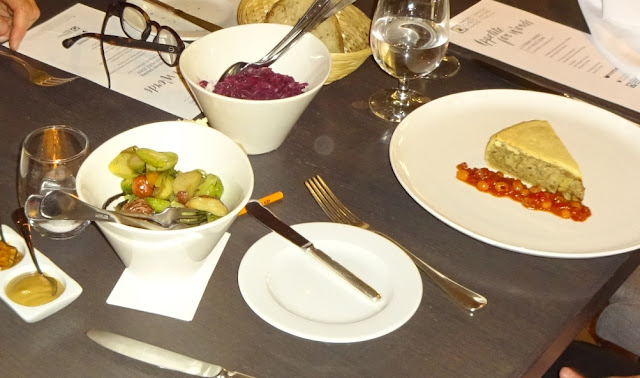 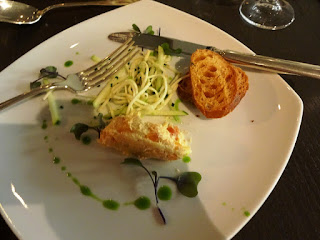 and THEN, in honour of the working-class setting of my novel, an upscale Québécois-themed supper hosted by the Appetite for Words Festival in Stratford. I've been to many réveillons and cabanes à sucre, and wow! Stratford's chef Randi Rudner topped any version of the old-timey pea soup and tourtière I've ever eaten. Luscious salmon, julienned celeriac, fresh puréed peas, chunks of smoked ham, poached egg, tourtière, spicy baked beans, sauteed brussel sprouts, red cabbage chutney... There was more! As well as wine pairings--some of which I had to refuse, poor me! because I don't drink red wine. (That's a joke, right? I was so happy that evening I could have drunk tap water.) Randi, I should note, although she has now lives in Ontario, is from Quebec so there is no appropriation of cuisine. 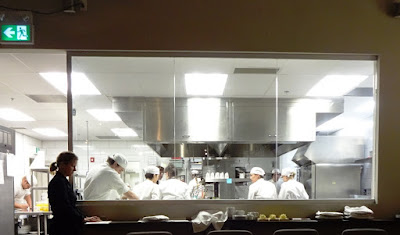 The back wall of the dining room of the Chefs' School is in glass, so diners can see the chef and cooks concocting the meal. I walked by the school earlier in the afternoon, and prep was already well underway. I was familiar with the scene since I worked in restaurant kitchens in another lifetime, when I was a grad student in Toronto.

Between tourtière and dessert, Theresa Albert and I had a lively interview about Five Roses.

The food was so fine! But of course the best part of all these events was meeting readers and would-be readers. Hearing the comments, observations, and questions readers have. Even hearing what people didn't like because that's worth talking about too.

Several wanted to know the practicalities of how a wannabe writer goes from scribbling on pages to getting them published. You keep at it. Beginnings can be humble. The other day I walked past the decrepit brick building behind a garage where, up on the second floor, I saw the dirty windows of the editorial office/kitchen of the magazine that first published me. I don't think the magazine went past two issues. I've just googled the name of the itchy young man who was the editor and can find no internet trace of him. Mind you, that was years ago. Years for him, years for me too. With years between publications. That's how you get published. You keep doing it despite the years.

This morning, in my reading, I came across this: "...the most worn-out clichés traverse time for generations, all the while the most beautiful poems fade to oblivion." (from La petite et le vieux by Marie-Renee Lavoie) Maybe that's what it means to be a writer: you persist in trying to beat the cliches and the silence, even when you know they're destined for oblivion.

Thank you to the wonderful people in Stratford who invited me; Jennifer Gillies at gritLit; Dundurn Press; the Quebec Writers' Federation for their unflagging support of getting Quebec writers out into the world; and R who ferried me about in a rented car so that I could bring as many pairs of shoes as I wanted.