I was in the park drinking a takeout iced decaff. Late afternoon light with that pinkish intimation that the leaves will soon be changing colour. I was sitting on a low concrete wall that circled a green area of plants and bushes. I hadn't bothered to take off my knapsack because it wasn't heavy. Green beans, a few Ontario peaches, a bag of peppers. In the event you ever want to buy peppers in Quebec, the French word for the vegetable is piment, not poivre which is spice pepper. It took me a few years of living here to realize I kept asking for the wrong kind of pepper. There were other people sitting nearby or walking through the park. I was listening to an audio book. Yes, I listen to audio books, and no, I don't consider it cheating. I listen carefully and repeat chapters if I feel I didn't do them justice. Listening improves our ability to retain what we hear. Of course, I still read print books as well. I only mention that I was listening to a book so you understand that I wasn't attuned to peripheral activity.

So that was the scene: me listening to something no one else could see, sipping my drink, aware that there were other people in the park, but mostly oblivious.

I felt a tug on my backpack and walloped behind me for all I was worth. I'm not tall nor heavy, but I have a lot of intent. I jumped up, ripped out my earbuds, whirled around and geez! A boy, maybe three years old, was lying on his back in the plants, bawling. I wanted to help him up--make sure I hadn't hurt him--but he did not want me to touch him--no surprise--and WHERE was the responsible adult???

Until finally a woman got off her phone and began hollering and barrelling down on me with a stroller where she had a baby. The boy scrambled up as soon as she got close enough. So good, he could move. I hadn't broken his back. English? Français? I asked. She was scolding him now in... my good guess would be one of the many varieties of Arabic. Français, she said coldly, dusting off her child, as annoyed with him as with me for having brought this incident upon them. Truly, I explained, I had no idea there was a child behind me. He pulled on my knapsack and I reacted. She said it was all right and wanted to wheel her stroller away, but the boy was still tearful and frightened of the nasty white woman, and I didn't want to leave it like that. I got down to his level and explained that I hadn't seen him. I just felt this great big strong yank on my bag and it frightened me! I thought it was a wolf in the park! I thought it was a monster who was hungry and wanted my groceries! I invented a few other scenarios, stretching my French fairytale vocabulary to the max. Maybe his mom thought I was crazy, but he was finally grinning and gave me a big wave when I backed away and waved at him.

So... I will probably still sit in the park listening to audio books, and woe to whoever tries to steal my green beans and Ontario peaches. 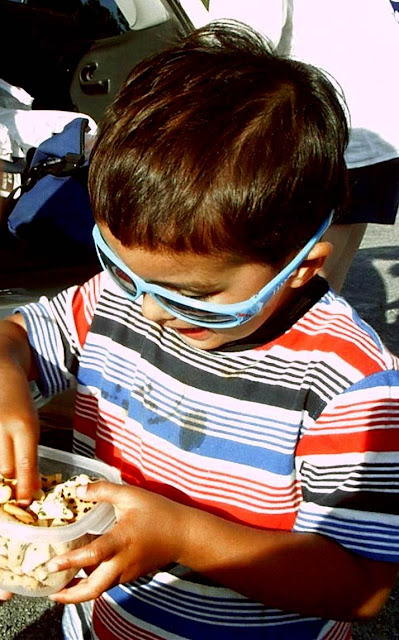 Here's a young friend who agreed to share his snack with me. I don't send all kids flying.
Posted by Alice at 10:13 PM