I am grieved to hear about the terrorist attack and deaths in Sousse in Tunisia.
R and I walked on that beach in 2006. 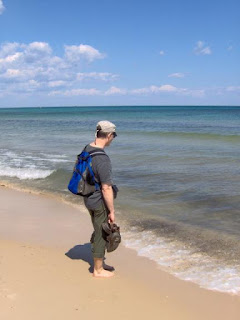 The sand was fine, the water milky with foam. The weather wasn't warm enough yet for swimming. 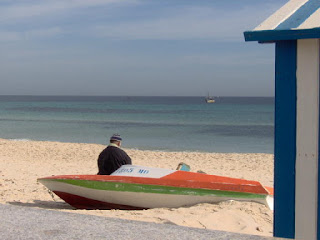 A significant sector of the population of Sousse depends on foreigners spending money--staying in hotels, eating in restaurants, buying pottery and embroidered djellabas in the souk. When I told Tunisians we were from Canada, they still called us les européens.

The world over knows Europeans like to drink wine. In Sousse I saw something I'd never seen before outside of a designated tourist district: wine glasses on restaurant tables. I asked a waiter (doubtfully) if they served wine. Of course, he said. Look, we have glasses.
Was I foolhardy to expect wine? To be so non-Muslim in a Muslim country? Tunisia is a wine-producing country. There are centuries-old vineyards transplanted from Bordeaux in Tunisia. I saw them. But the Tourist Office claims (because I asked) all the wine is exported. Every last bottle. 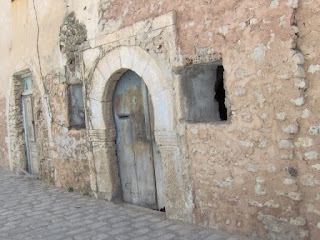 In Sousse that evening R and I returned to the restaurant. This waiter wanted to know what kind of fish we were having. Whatever we said, he would bring us a platter with raw fish to approve before it was cooked. There was no point waving it away. If you didn't look, the waiter urged you to notice the eyes on the various fish, even to prod the flesh.
I asked for a glass of wine. I wasn't trying to disturb the customs of the country or be offensive. I had been told there was wine. But of course, there wasn't. The wine glasses were a clever ruse to get Europeans into the restaurant. Once they'd chosen their fish and it was being cooked, they had to stay.

When I asked for wine in a restaurant where I had been assured there was wine, although I was in a Muslim country, was I more sinned against or sinning? 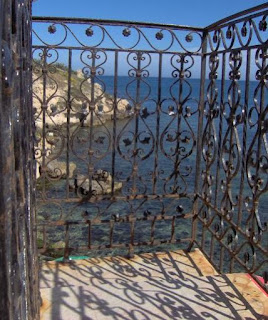 Here's a cat pretending it's not suffocating in that cabinet under the midday sun. I opened the door at the back for it to escape. It stayed there. Somewhere I've included this stubborn--or lazy--orange cat in a story. 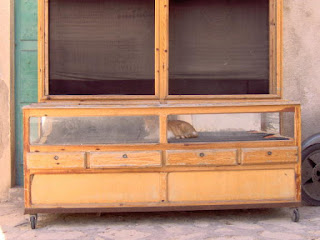 Here's me in a hotel taking notes. The window opened onto the Mediterranean. That, too--the view onto the blue green water--is somewhere in a story. Also the fabric, bordered with pompoms, that lined the walls. 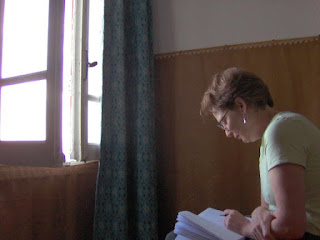 One day I was walking and saw this deranged-looking person walking toward me. This was after I'd been in Tunisia for a month and had gotten used to everyone having dark hair that was either tied back neatly or hidden by a hijab, dark eyes and skin that was browner than mine. This person had short crazy red hair and blue eyes bugged out of a pale, freckled face. Then I realized she was my own reflection.

From Sousse we went to Mahdia by train. At one point the train stopped. We sat motionless for an hour. We had no idea why. None of the other passengers seemed concerned. We sat like the others waiting/hoping for the train to start again. Nobody else admitted to speaking French or English--except for a man who got onto the train and tried to sell us a lizard that looked like a brown spotted Gumby crawling up his T-shirt. Finally we heard shouting down the track. No one else reacted. Not as inshallah as the others, R and I decided to look. The train was on fire. It was all we could do to rouse the passengers, who still sat in their seats, to get off the train which was not going to move for the next few hours. 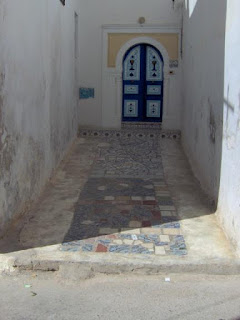 After our stay in Sousse and Mahdia, we went to Dougga where we visited the Roman ruins. If you are in Italy and visit the Colosseum, you will see how European restorers have tidied the place for tourist consumption. The Tunisians didn't give a hoot about Western history, though they were smart enough to know when they could milk a few dinar out of Western tourists. Without actually honouring a past they didn't believe in, they charged an entrance fee and allowed us to visit Roman pillars as they stood, still intact, with sheep grazing around them. 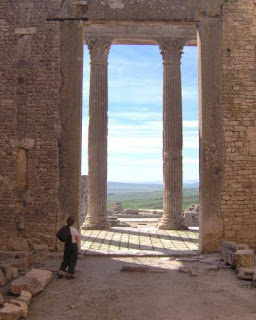 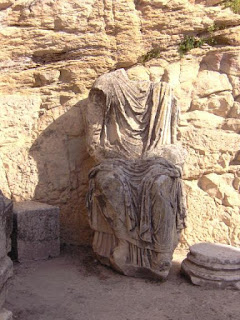 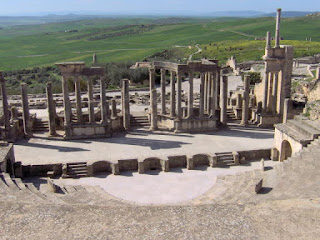 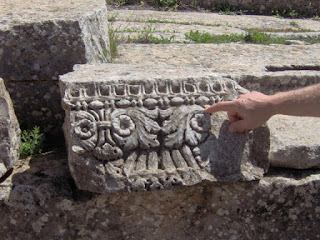 I don't know how much of the Tunisian economy is dependent on tourism--the hotels, the restaurants, the trips into the desert on camels, the embroidered djellabas and slippers--but tourism in Tunisia has been stopped now. Who suffers the most? The tourists will simply go somewhere else. What about the Tunisians trying to keep their families fed?

Here are Shaima and Jahil whose parents fed us. They asked me to take their picture. 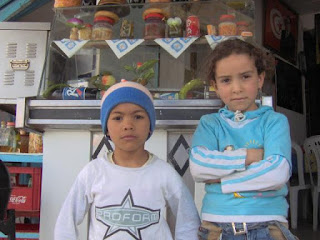