Here's a Grimms fairytale I remember from childhood because of the illustrations. I was particularly taken with the way the girl strapped a stool to her back--and not just any stool. It has carved legs. No collapsible, lightweight camping stools in the world of fairytales. 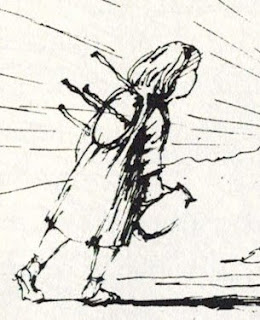 A man had seven sons and still no daughter, much as he longed for one.
--nice that he wanted a girl, but less practical that he wished yet another pregnancy on his wife

Finally his wife told him she was expecting again. When she gave birth, the child was a girl.
He was delighted, but the girl was frail and small, so needed to be baptized immediately.
--what exactly happens to children, who die unbaptized, has plagued Christian theologians since forever. When I was growing up and taught Catholic belief, I was told they go to limbo. It's an indeterminate state of neither heaven nor hell. Spiritual dusk.

The man told one of his sons to run to the spring for baptismal water. The other six hustled along, and since each wanted to be the first to fetch the water, the jug was knocked into the well. They stood, not knowing what to do. Not one of them dared to go home.
--another version of spiritual dusk

As they still didn't return, the father grew impatient and said, "For sure they've started playing some game and forgot what I told them, those godless brats." He grew afraid that his daughter might die unbaptized, and in his vexation cried, "I wish they would all turn into ravens."
He'd hardly spoken the word when he heard flapping in the air over his head, looked up and saw seven coal-black ravens flying up and away.

The parents couldn't take back the curse, and as sad as they were over the loss of their sons, they found comfort in their darling daughter, who every day grew stronger and more beautiful.
--I'm surprised at so little grief over the loss of seven children, but let's keep the story moving.

For a long time the little girl didn't know she had brothers, because the parents were careful never to mention it, until one day she heard people saying that, although she was pretty, she was responsible for the misfortune of her seven brothers.
--don't you love the slant gossips take? How about, for example, blaming the father who cursed the boys?

Troubled to hear this, the girl asked her parents if she had brothers and what had happened to them. The parents realized they could no longer keep the secret. They told her it was heaven's fate and not her fault that her birth had caused it.
--heaven made the father curse his sons? The mix of religious belief, magic, and superstition in this story is dizzying.

The girl's conscience bothered her. Every day she told herself she had to rescue her brothers. She had no peace nor rest until, telling no one, she set out into the world to search for her brothers and free them, cost what it would. She took nothing with her but a small ring from her parents as a keepsake, a loaf of bread against hunger, a small jug of water against thirst, and a little stool for when she was tired. 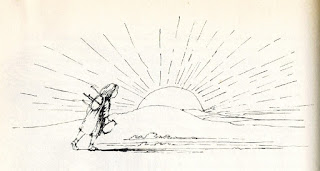 And so she walked, farther and farther until the end of the world. She came to the sun but it was too hot and frightening and ate little children. Hurriedly she ran away toward the moon, but it was too cold and scary and mean, and when it noticed the child, said, "I smell, I smell human flesh." 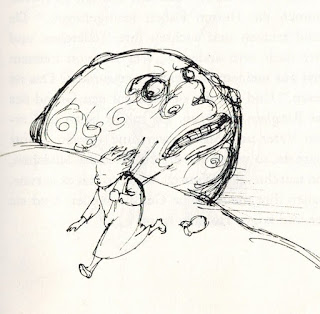 The girl ran away quickly and came to the stars. They were friendly and kind, and each sat on her unusual stool.Then the morning star stood, gave her a chicken bone and said, "Without this little bone, you won't be able to unlock the glass mountain. Inside the glass mountain are your brothers." 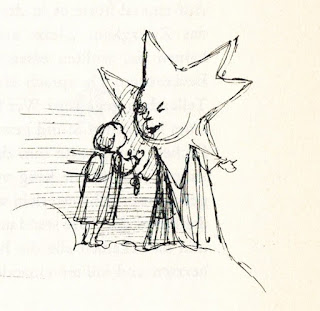 The girl wrapped the bone carefully in a small cloth and set out again, walking until she came to the glass mountain. The great door was locked, but when she reached for the cloth, where she had wrapped the bone, and unrolled it, the cloth was empty. She had lost the good star's gift.
What should she do now? She wanted to save her brothers but had no key to get into the glass mountain. The good little sister took a knife, cut off her little finger, and pushed it in the lock which happily now opened. 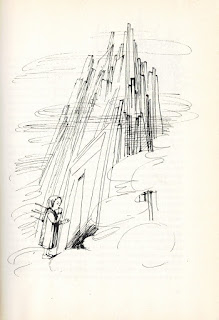 As she walked in, a dwarf approached. "My child, what are you looking for?"
"I'm looking for my brothers, the seven ravens."
"The gentlemen are not home, but if you want to wait until they arrive, come inside."
The dwarf carried in the ravens' meals on seven small plates and seven small beakers. From each plate the girl ate a crumb, and from each beaker she took a sip.
--that's right, echoes of Goldilocks. If it works in one story, why not another? Please note, though, if any surprise guests want to make their presence known in my house, I would request that you keep your oral bacteria to yourself.

In the last beaker the girl dropped the ring she had brought from home.
Suddenly she heard flapping and felt the air stirring. The dwarf said, "The gentlemen ravens are flying home."
They arrived, ready for their supper and sat at the table before their food and drink. One after the other said, "Who has eaten from my plate? Who has drunk from my beaker? This was a human's mouth." And as the seventh emptied his beaker, the ring rolled toward him. He recognized it was a ring from their father and mother, and said, "By the grace of god, if our sister were here, then we would be saved."
When the girl, who was standing by the door heard the wish, she came forward, and the ravens became humans again. They hugged and kissed each other and made their happy way home.

--a footnote about a German verb in that last sentence. The siblings didn't hug each other. They "hearted" each other. "Und sie herzten und küssten einander..." Current texting lingo existed long before Facebook.