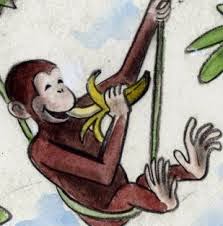 If you have children, or if you were read to as a child, you're probably familiar with the phenomenon of Curious George--a monkey captured in Africa by the Man with the Yellow Hat who brought him to a big city to live in a zoo. Yellow bananas, yellow banana-shaped hat.

Curious George has adventures that backfire. Despite tense moments, everything ends with a smile. I think children enjoy the naughtiness of George's daring. Critics discuss the post-colonial representation of a slave-capture narrative.

I'm not sure how I grew up never hearing about Curious George. I only know about the monkey since I've started reading to children at an unidentified place which I cannot name. I'm taken aback by the number of children who aren't interested in the two large bins of books we can choose from--one English, one French--the instant they see the monkey. "Curious George! Georges, le Petit Curieux!"

I thought of printing up a few of the essays about the slave-capture narrative to give to the committee who purchases the books, but later Curious George books don't refer to his arrival from Africa. He's simply here in the city. The more recent Curious George books have grown more tame in response to parental concern that George wasn't a good role model. George's adventures aren't even all that naughty anymore.

I find Curious George dull to read, especially after having read the books out loud a few dozen times already. I don't have a child's fascination for ongoing repetition. (What is that all about? Does it make kids feel  secure?) What I do now is hide the Curious George books in the cupboard. I show the kids the other books I can read to them.