how not to steal a purse / easter eggs

I'm not giving lessons on purse-snatching do's and don'ts. Heck, I just lost a purse! But as an overview, simply observing...

Yesterday I was browsing through the kitchen aisles of a large thrift store. I'm not trying to hide the name. It used to be the Sally Ann, aka Salvation Army, on Notre Dame, which is what I still call it. I think it has a non-denominational name now, but I've never paid attention to what it is.

It was a sunny Saturday afternoon and lots of people were in the store, shoving through hangers, stretching sweaters across their chests, picking up dusty cups, discussing the virtues of chipped veneer dressers. I want to make a tabletop greenhouse. I'll explain how and why in another post. I had just spent a hefty $40 at Canadian Tire for part of what I need, and was trying to find something to cover the table. R said he'd make me a glass or plexiglass box, but in the meantime I want to get started. I thought I might find some cheap cake covers at the Sally Ann.

A woman was walking through the store, shouting in a strident, potentially crazy voice. You know that register where you don't listen because it doesn't sound like the person is saying anything you want to hear or that will make sense. I wondered that the employees didn't ask her to stop.

She wasn't crazy. She was demanding. She didn't need a megaphone. Her voice carried. I'll bet she has six kids--all grown up now--and they still hear her voice in their dreams. She was about sixty, maybe older. Her hair was dyed an orangey red to match her voice. She wore beige slacks and a cream sweater with a glittery design. High heels. She was out for an afternoon of leisurely shopping. Her coat was thrown over the handle of the shopping cart she was pushing. Presumably her purse had been next to her coat. She strutted up and down the aisles. She wasn't panicked. She was set on flushing the thief from between the winter coats or the curtains or wherever she imagined him hiding.

I'd found two cake covers and decided to look at the back of the store among the lamps and ancient computers. You never know what gets filed where in a thrift store.

I didn't find anything else and went to the cash to pay. She was at the front of the store, triumphant, with her purse in hand, talking on her cell phone. The cashiers were excited and talking amongst themselves. It seemed the man who'd stolen the purse had left the store then returned with it--maybe to try to steal another purse, maybe to return the purse from where he'd taken it? I gathered no one asked him. He walked back into the store with the purse he'd already stolen in plain view. One of the cashiers recognized it and gave the alarm. Some Sally Ann employees chased him into the street and got the purse back. I didn't see him anywhere, but they were saying they'd got him too.

Excitement at the thrift store. Plus I got two cake covers for $2.70. 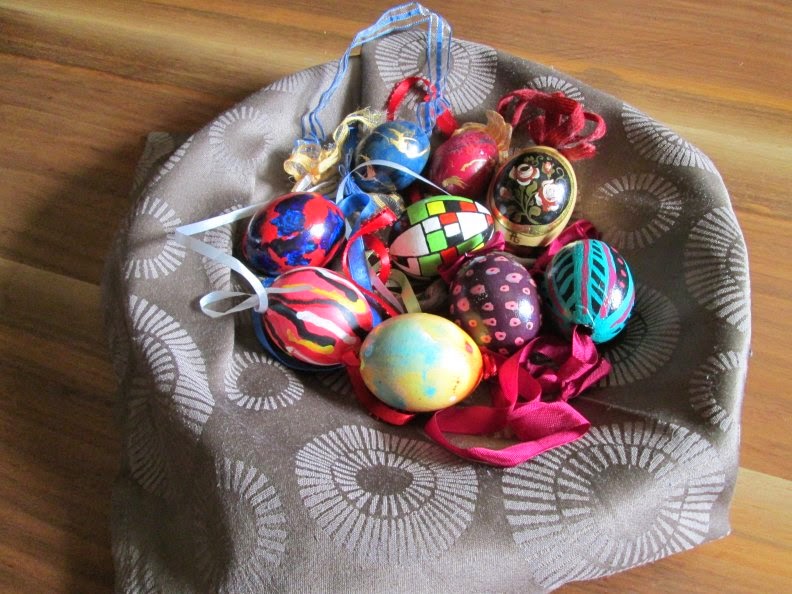 And here are some Easter eggs. The two small marbled eggs have real gold leaf on them. That's Austrian handiwork, made by my cousin Sabine who unfortunately, far too young, passed away last year. I can't recall who gave me the flower egg. I used to have a completely gold-leafed goose egg (also from an Austrian relative--my aunt Franziska?) that was accidentally broken. The custom is to hang Easter eggs from window frames or chandeliers. That's how the golden goose egg got broken, so I don't do it anymore. R and I painted the other eggs.