what to keep in these pockets 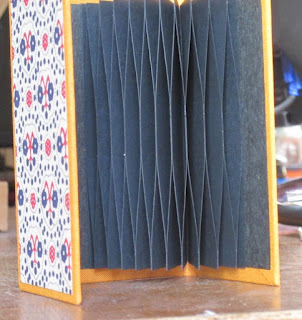 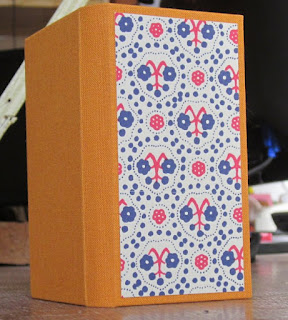 A friend, M, sent me this from Berlin. It's the size of a small notebook. She has many delightful ideas as to what I might keep in the pockets: paper sleeves of needles; bits of thread; a spare button; fortune cookie messages; guitar picks... She bought it in a shop near the Museum of Things.
I want to go to this museum with its tantalizing name, as well as this shop, as well as to visit her in this city she has grown to love. I've never been to Berlin.
I keep the thing upright on a bookshelf behind my desk. When I first opened the envelope, before I read her letter with its suggestions, I thought of locks of hair. The pockets would be just the right size. I could fold the locks in tissue paper so they wouldn't get mixed up. Not children's hair. Where would I get that? I was thinking of past lovers.
This has nothing to do with numbers--whether I've had enough to fill all the pockets or whether I've had too many. It's more to do with a feeling I sometimes have that it's too bad there's nothing left from all those good and messy times. You get so involved in someone's life, listen to their stories, compliment their mother's ill-fitting dress, maybe never meet a family member and hear all about why, know whether they take sugar in their coffee or drink it black--and then, poof! they're gone.
I was once married for three years and the only object I've got left from that time is his copy of As I Lay Dying with his Grade 13 notes: "Define any words or terms that need definition. Tell clearly what the subject of essay is."
I used to have jazz LPs I bought while I was with the man with gleaming straight black hair. Where are those LPs now?
For two years I lived with a man who was going bald at twenty-two. I came home one day and found him asleep on the sofa with a cabbage leaf on his head. He'd heard that stopped hair from falling out. I'm glad he never heard the one about sleeping with a raw steak on the head. If I'd kept a tuft of his frizzy hair, it would now be a relic of something that no longer exists.
It would be nice to have a lock of R's hair (though he's not a past lover; very much in the present) when it was still brown. Some years ago, when he got a new passport, the agent at the desk crossed out BROWN and wrote GREY. I like his grey hair. Lately I'm catching up, though mine's going white.
For lack of locks, I'm keeping the pockets empty. Behind me, where I sit writing, maybe they'll catch the trail of sentences that escape me. It will be a practical version of a dream-catcher. The design does look very practical and efficient, doesn't it? Very German.
Too bad I don't play a musical instrument, because I like the idea of guitar picks best.

Email ThisBlogThis!Share to TwitterShare to FacebookShare to Pinterest
Labels: german