On this last trip to the Gaspé, we wanted to hike along another stretch of the Appalachian Trail, which begins in Georgia and continues "unofficially" (I think that means without the say-so of Americans?) through the Gaspé Peninsula to the tip.
Years ago I climbed some of the trail in New Hampshire. Here in the Gaspé I’ve done short hikes along the coast near Mont St. Pierre, Mont Louis, L’Anse Pleureuse and Gros Morne. The views can be stunning, overlooking the water or across a range of forested hills called the Chic Chocs.
Here are some pix: 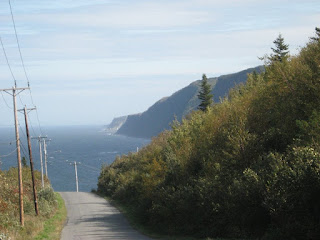 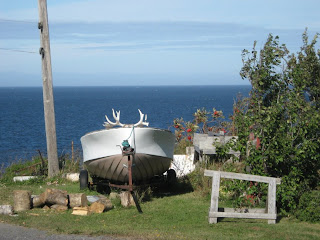 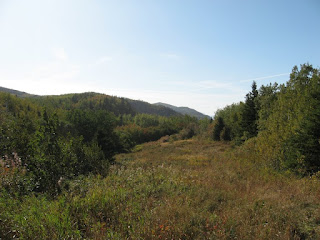 Note that the trail heads are hard to find, the locals aren't always privy, and the paths aren't well indicated, which has made me wary of trying the longer sections of trail that head into the woods. Though they might be fine. I will eventually take a chance. We do usually find the trail.
Of the sections we've done, some take advantage of an already existing back road—which is not well-travelled and can be picturesque (see above). And sometimes the trail is on the side of highway #132 with the logging trucks and traffic speeding by.

This year, as I'm still convalescing, I didn't want to climb any hills. We set out on the path from Grande Vallée to Petite Vallée—6 k one way and along the shoreline, below the cliffs. We wouldn’t have found the trail, which isn’t indicated on the road, if we hadn’t stopped at the tourist office. A very enthusiastic woman with long hair pulled into a waterfall ponytail told us the trail started behind the ice cream stand. We found the bar laitier and there, in the parking lot, was the sign for the trail.

It began as a grassy trail that opened onto beds of rock pebbles that rolled and clattered underfoot. Sounded like ceramic bowling pins tumbling. Around the base of a cliff and we hit a cove of shale plates that slid when you walked across them, sometimes cracked. Out in the bay was a small island populated by birds and plastered white with guano. 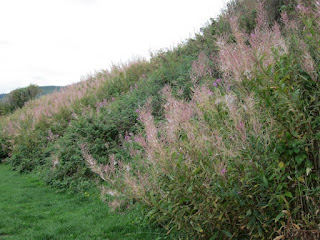 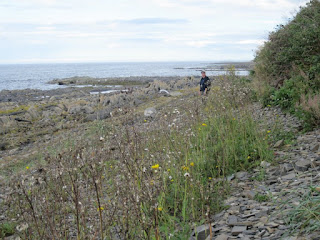 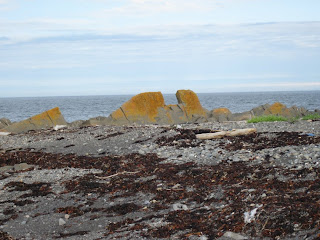 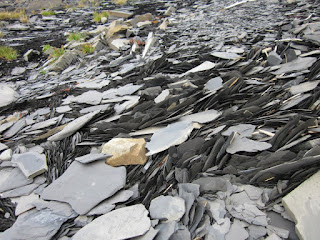 Someone had left an art installation of rocks, including a bench whereon to sit and admire them just like in the best art galleries. 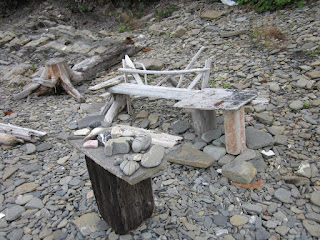 Here’s a shack where—you’d never know it from the blue sky overhead--on the way back, an hour later, it started raining and we took shelter. There was a chair hanging on wires from the ceiling. Do you see the flip flop over the doorway? 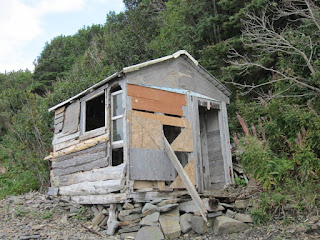 Since I was taking pictures, I took one here too. Trucks dumped garbage over the cliff above. Many, many trucks. Maybe they assumed the sea would wash the garbage away. Someone came along later and dumped earth to hide the junk, but the tides uncovered the mess.

Yeah, it's gross to be walking along the shore with a breeze coming in and the waves splashing, and lo, there's a mound of compacted plastic and rusted metal that will take longer than the rocks and the cliffs to decompose. But there's something deserving and in-your-face about it too. People make garbage, dump it in plastic bags, garbage cans, off down the road in a garbage truck, and quick-quick, forget it. Do you, for example, know where your garbage ends up?
Of course, you can walk on this trail and never see the garbage. We didn't see it on our way out. Only on our way back, the tide started coming in and we had to walk closer to the cliffs.

Despite the reality check with the garbage, I would recommend this stretch along the Appalachian Trail, from Grande Vallée to Petite Vallée. It's a hike too--not just a stroll--because of the rocky beaches.
But remember to check the tides. When we asked the enthusiastic woman at the Tourist Office about the trail, she whipped around and stared at the clock. You should be okay, she said. High tide won't be in until 7. As we walked, I took note of a few coves with deep inset shorelines and not much beach. I wondered how quickly the tide came in. When we turned back, we were still three hours from high tide, yet the margin of beach was getting ever more narrow. We got to a cove where we had to climb across the boulders higher up at the bottom of the cliff. Had we waited another twenty minutes we would have been stranded on the other side.
p.s. Am I saying that the trail heads along this "unofficial" stretch of the Appalachian Trail should be better marked? Yes, I am!
Posted by Alice at 11:18 PM