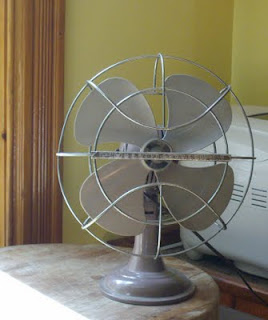 This is a vintage Westinghouse fan from the 1950s. It doesn't oscillate. The base is made of heavy metal--like cast iron--painted a pinkish taupe. Weird colour. The motor heats when the fan is plugged in. The plug is the only on/off switch.
A few years ago my father found the fan in some back closet and asked if I wanted it. Since I'm the least obviously successful of his children in terms of yearly income and possession of a vehicle (I have two bicycles and a bus pass), he frequently offers me cast-off goods no one else wants. Old televisions. A weigh scale. Tools.
The fan's steady blow and drone take me right back to childhood. That weird colour too.
R and I have other fans, but at some point in the summer I grab this one and plug it in. R objects because the whirring blades are more or less exposed. Back in the 50s enough people hadn't had their fingers chopped off yet for the designers to understand that the blades should be enclosed in a grill. That still had to happen.
R worries that I'm going to forget the fan, which sounds like a rumbling truck and blows a domestic-size gale, and accidentally flap a hand through the blades. It's true I'm clumsy. I knock over glasses. Walk into door frames. Bang myself on edges. Not just at home. I do it at work too. People know better than to toss me anything. It will land on the floor.
But I figure that I got through childhood with that fan on an end table in the living room and I still have both  hands. It's not going to attack me now.
Posted by Alice at 9:53 AM